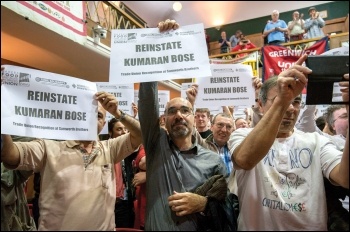 On 6 December, Kumaran Bose will be meeting a number of MPs (including shadow ministers) to discuss his recent sacking by Samworth Brothers, a company known for its famous household brands, such as Ginsters and Soreen. He worked for Samworth Brothers for 12 years, with an unblemished work record.

However, everything changed for Kumaran after the Conservative government introduced its much heralded 'living wage' in April 2016. Like many other employers, Samworth Brothers decided to dodge the minor pay increase for those over the age of 25 by making the workforce fund it themselves.

As the company set out its agenda of slashing certain contractual terms that the workforce had, such as paid break-times, overtime rates and shift premiums, many workers at the site felt that the changes being proposed were unfair, especially as it was widely known that the company's profits for the year were set to soar.

As a result, a number of employees approached Kumaran for guidance, so in his role as a team leader he raised the workers' concerns and asked searching questions to CEOs, during company briefings. Unfortunately, the company's response was that due to the introduction of the 'living wage', it had no option.

The workforce turned to the Bakers', Food and Allied Workers Union (BFAWU) and met with representatives, who offered support and assistance. Consequently, hundreds of them joined the union.

However, despite many requests from employees and approaches from BFAWU itself, a collective agreement and recognition of BFAWU has always been resisted by Samworth Brothers. The management decided that Kumaran was responsible for the company being 'named and shamed' and he was suspended from work.

At his first disciplinary hearing, the initial reasons were dropped, as they were based on false allegations. However, the company then changed tack by accusing him of a breach of confidentiality, despite there being no convincing evidence to back-up this claim. He was dismissed.

The meeting with MPs is to discuss how the lack of protection given to workers' terms and conditions has left them vulnerable to unscrupulous employers seeking to avoid paying the living wage.