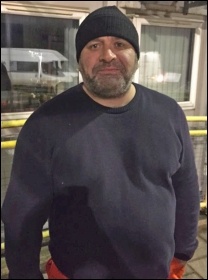 Socialist Party member Paul Reilly, a branch secretary of the RMT transport workers' union in Nuneaton, has been elected to the union's national executive committee to represent the Midlands region.

Network Rail worker and former Trade Unionist and Socialist Coalition (TUSC) candidate Paul said: "To have received the confidence and support of our members over these past few months and to be elected by them on to the executive is a massive honour!

"This won't be easy at all, but I'm ready and willing to take up the challenge head on! I won't let you down!"

The Tories have confirmed that their anti-union laws, incorporated in the Trade Union Act, including new undemocratic industrial action ballot thresholds, will come into force on 1 March.

The National Shop Stewards Network (NSSN) calls on the TUC to implement the policy passed at this year's TUC Congress moved by the RMT, which includes: "Congress believes the General Council needs to convene an urgent conference of affiliates to provide a practical forum, including workshops, as to how to best coordinate our legal and industrial response to the act in line with policy already set by congress."

And an amendment from the FBU: "Congress should discuss all options for challenging the new legislation. This should include stepping up the campaign to scrap the Act and other anti-union legislation as well as the practical steps to be taken to support any unions and groups of workers threatened by this anti-worker legislation."