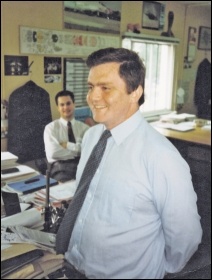 John Sharpe working at Rolls-Royce, where he was a Militant-supporting trade union activist   (Click to enlarge)

Showing his resolute commitment to the fight for socialism, he gave up his job at Rolls Royce in the early 1990s and came to work on the printing press of Militant, forerunner of the Socialist.

After decades working on precision-built engines, he had to learn a different sort of engineering. He was heard to remark that he'd never seen so much mild steel in his life! And he never quite got used to making modifications to the press without any drawings. 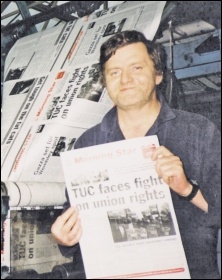 John Sharpe working on the Militant's press, here pictured printing the Morning Star on one of the two occasions Militant assisted with this   (Click to enlarge)

He worked on the press through the move out of Hepscott Road and, with a skilled team of printers, carried on coaxing miracles out of it in Clapton - usually accompanied by very loud rock music.

He was always interested in computers, particularly coding, and relished the new challenge of looking after the growing computer network in our HQ, when the old newspaper press came to the end of its life. He taught himself several new languages and laid the basis for most of the databases used today.

He also did pioneering work on the website of the Committee for a Workers' International, which he was very proud to do, sometimes posting material early in the morning to make sure it was always up to date.

Again, he taught himself various arcane computer languages to be able to manage the servers in the office properly and always had a touching expectation that anyone he talked to would be as fascinated as him about whatever task he was engaged in.

He was dedicated to making sure the Socialist always came out and enjoyed helping with the proofreading. 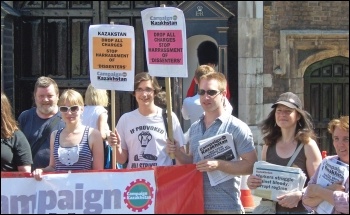 Latterly, every Wednesday morning John was at the factory packing the paper and making sure all the branches got the leaflets and posters they had ordered. He organised that with precision and instigated several important improvements to the process. He also made sure most people in the surrounding premises found out what was on 6Music.

John was a kind and generous man, a trade union militant and a committed Marxist who read avidly and always kept on top of current developments.

He has died far too young.

Hannah Sell on behalf of the Socialist Party executive committee

The sudden death of John Sharpe has been a terrible shock to all who knew him. He will be badly missed.

While always happy to discuss ideas, John was never a comrade who sought the limelight. He was very self-sacrificing and, like many others, played a vital role behind the scenes in building the Socialist Party.

He had worked at our national headquarters since 1992, first in the print shop and latterly on many varied tasks including maintaining our computer system and databases, proofreading for the Socialist and packing and sending it out to Socialist Party branches.

Every Socialist Party member and reader of the Socialist, even if they never met John, will have benefited from his work, which ensured among many other things, that their membership card was posted to them and their papers arrived on the doormat ever week.

The best tribute we can pay him is to redouble our efforts to build the party he dedicated his life to. 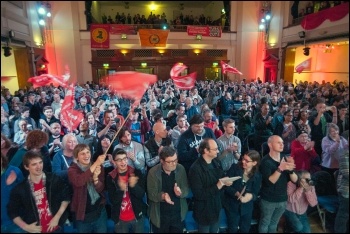 John Sharpe (centre) at the Socialism 2014 rally   (Click to enlarge)

In 1977 I addressed the Rolls Royce Joint Shop Stewards Committee in Bristol to ask if they would make a donation to the Labour Party Young Socialists national conference fund.

Every year they did so, but that year they said they had an apprentice who they would like to sponsor to attend. This was John Sharpe, who quickly embraced the ideas of Militant at the conference, and upon returning wholeheartedly threw himself into the many tasks of helping to build support for Marxist ideas.

For John politics was a serious commitment and at work, in his AUEW (TASS) union branch, and within the Bristol North East Labour Party (then under the iron control of the right wing) he fought tigerishly to promote our programme.

Theory was his guide throughout his political life, whether as a young comrade eagerly participating in discussion groups, or as a mature Marxist seeking to keep abreast of the latest twists and turns in the international political position. His enthusiasm when someone came over to our position knew no bounds.

When John had an opportunity to work in the Militant print shop in London, he answered the call unhesitatingly. Just prior to his move, he attended one of Militant's huge rallies at the Wembley conference centre and donated a five figure sum from his redundancy money. This prompted journalist Mark Steel to write of his amazement at the self-sacrificing traditions of our supporters.

Many's the time John has told me how gratifying he found the work in the print shop - the camaraderie and the crises!

Few have been more steadfast than John - with an unbreakable and unshakeable belief in the socialist future of humankind and a pride in his being a part of its construction. 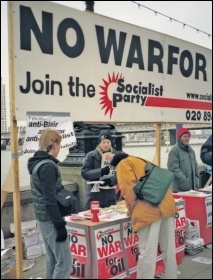 John had a major impact on me as a young student supporter of Militant in the late 1970s. He was always supportive of any young activist, particularly students. He was able to explain Marxist theory clearly from a worker's point of view but always made sure that any student kept their feet firmly on the ground. Woe betide any who missed their Friday morning paper sale!

John was at the centre of much of the social life in Bristol at the time and was renowned for his generosity. He was the first person to put his hand in his pocket to buy a drink and always made sure that everyone was looked after. I hate to think of how many curries John fully or partially subsidised after a night in the pub.

John was modest and shy, avoiding the spotlight, but one of those activists that you could always depend on. He will be sorely missed.