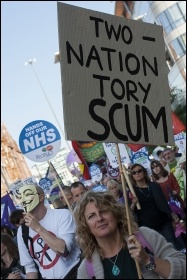 In the 19th century, Walter Bagehot, a constitutional scholar, said: "Poverty is an anomaly to rich people; it is very difficult to make out why people who want dinner do not ring the bell."

For working people in the UK today poverty is becoming a normality, just as it was in Bagehot's time.

According to a recent report from the Joseph Rowntree Foundation (JRF) 55% of poor people now live in working households - for the first time on record.

While wages haven't risen since 2005 for most people, housing costs have rocketed as private landlords have muscled into the housing market, and the welfare safety net has had great holes cut in it.

Women and young people make up a majority of workers who are in poverty, and almost half of poor households include a disabled adult. Poverty has no commitment to equal opportunities.

The report warns that the coming reduction in the benefits cap will pitch 90,000 families into extreme poverty.

JRF is a charity, however, and it would be uncharitable of them to embarrass the government, or indeed the obscenely rich 0.1% who stand behind that government

That's why, in this report, they do no more than mildly request a benefits system that works to prevent poverty. But this ignores the fact that every government since 1979 has worked in the opposite direction.

For socialists the report's findings show that we need to issue a less gentle warning to the government, employers and housing profiteers: we are coming for you!

We want a minimum wage of £10 an hour without exemptions, we want rent controls and rent reductions, we want an end to zero-hour contracts and full rights at work, and we want to be able to live like human beings when we can't work. We are campaigning for these basic demands and more besides.

More importantly, we want a democratically planned economy and an end to the poverty and inequality generated by capitalism - we want a socialist future!