Link to this page: https://www.socialistparty.org.uk/articles/24219 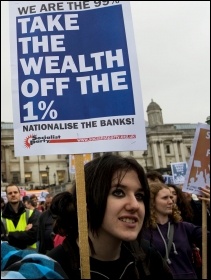 The gap between the richest and poorest in the world is growing - and is even worse than originally feared, according to a report by poverty charity Oxfam released today.

Eight people - yes eight - own as much wealth as the poorest 50% of the world population. That's 3.7 billion human beings. New data regarding distribution of global wealth, particularly in India and China, has provided this shocking statistic.

Last year Oxfam calculated that 62 billionaires owned as much as the world's poorest half. However, the new information shows it should have been just nine billionaires. A figure which, one year later, has gone down again.

Driven-down wages, casualised jobs, the 'gig economy' and part-time employment are just a few examples of how extra profit is made off us. One in five men in the UK work part-time for low hourly rates - 20 years ago it was one in twenty, according to the Institute for Fiscal Studies.

London's Blairite mayor Sadiq Khan is going to hobnob, and deliver a speech on London and Brexit. "London is open" will be his theme. When said to a gang of billionaires, this only means 'London is open for the worker to be exploited'.