From The Socialist newspaper, 18 January 2017 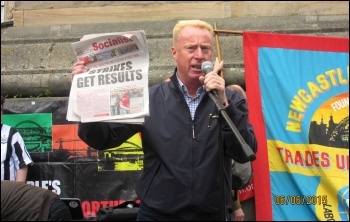 Two thousand more people snapped up the Socialist on the streets over the last ten issues of 2016 than the same period in 2015. The number of copies that drop on the doormats of our subscribers has gone up too.

A study by Oxfam shows eight individuals now own as much wealth as half the world's population - 3.7 billion. After years of austerity - while the rich have got richer - 2016 saw the beginning of a working class revolt against the establishment.

It's becoming clearer and clearer that capitalism is incapable of providing a decent standard of living for the vast majority of people. A socialist paper is essential at a time like this to offer an alternative.

The Socialist has shown how over decades the Tories and New Labour have run down the NHS, preparing it for privatisation. Theresa May says 'crisis, what crisis?' But our NHS articles, written by health workers themselves in their own words, set out clearly what the problems are - and the solutions. We're backing the 4 March NHS national demonstration.

The Socialist needs your support. Can you subscribe to our paper? And get a friend to do the same? You can do so at socialistparty.org.uk/subscribe.

The Socialist is written by workers, for workers. Can you write for the Socialist? If you're angry about something you've seen in the news or you're a student campaigning on campus, let us know what you think, jot it down and send it to editors@socialistparty.org.uk.

If you read an article you like in the Socialist and can think of someone who will enjoy it as much as you, make sure they get a copy. Can you become a seller of the Socialist? You don't have to be a Socialist Party member to sell it.

If you'd like someone from the Socialist paper to speak at a meeting about the role of a revolutionary paper, please contact us.

2017 is the 100th anniversary of the Russian revolution. The capitalist media will be full of articles denigrating the achievements of the revolution. The establishment will use this centenary to shoot down any idea that things can be different. The Socialist paper will challenge that bias, whether it's directed against workers 100 years ago or today.

The Socialist is a beacon for the idea that ordinary working class people can run society in our own interests.