Link to this page: https://www.socialistparty.org.uk/articles/24835 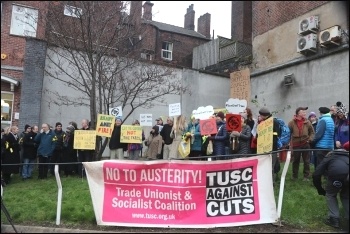 "Not in the public interest"

Calvin Payne, one of the charged protesters

The Labour-run Sheffield City Council is almost five years into a 25 year, £2.2 billion, Private Finance Initiative (PFI) 'maintenance' contract with a multinational company called Amey, to resurface and maintain our streets and pavements.

It soon became apparent that part of the deal was that a city that is rightly proud of its trees and green spaces was going to lose lots of them for Amey's profit. A city-wide campaign soon organised itself to challenge the flimsy arguments put forward by the council. However it was impervious to expert opinion from across the world and more direct opposition began to be organised.

In June 2015 the first neighbourhood group organised itself to physically prevent contractors from felling healthy trees, attracting lots of media attention and successfully saving the trees on their street by forming a line of residents across the road. Since then parts of the Save Sheffield Trees campaign have adopted more militant tactics in standing up to the felling programme.

For several months the growing action was achieving success, until 2nd November last year when the Amey contractors, accompanied by South Yorkshire Police, arrived to fell a single tree in Nether Edge. On this occasion they were both waving a copy of the 1992 Trade Union Act - Tory anti-trade union legislation used against pickets in industrial disputes, which threatens a six month prison sentence.

Campaigners were accused of 'hindering workers from using their tools' as we peacefully stood our ground against environmental destruction for private profit. The police spent four hours trying to persuade us to end our stand. They were threatening to arrest us, while also trying to encourage us to go home! It was clear they didn't know what to make of the situation, however they had instructions from somewhere and the final warning was given to around 20 of us to disperse.

After lengthy discussions about the way forward we decided to call their bluff and two of us refused to move when the final warning was given by a police Inspector. With a dozen reporters and cameramen present myself and a colleague were very peacefully arrested and taken to the holding cells. There we were held for eight hours as the police couldn't find the charge on the computer, as they had never arrested anyone for it before! Two days later confirmation was received that the police and the Crown Prosecution Service (CPS) were going to proceed with the charges.

On 1st December the two of us appeared before the local magistrates' court and heard the charge. Around 150 people attended a rally outside the court and national media carried the story. We pleaded 'not guilty' and looked forward to having a full trial with the police, Amey, and Sheffield council representatives being questioned about the secretive nature of their contract dealings.

Over the next couple of months 11 more campaigners, including a Green councillor, were arrested for peaceful, static, protest under the same untested law and the focus on our 9th March trial date became more intense.

Then last week we heard that our charges had been dropped by the CPS as 'not in the public interest' despite our charges and court appearance satisfying the same condition. It isn't clear when it stopped being in the public interest to arrest, charge, and possibly imprison members of the public for peaceful protest. At the time of writing nine of the charges are still standing, awaiting review, and the direct action against tree felling in Sheffield is growing with more people coming forward to risk being arrested if necessary.

The fight against PFI sponsored environmental attacks in Sheffield continues to grow. Cuts are cuts whether they be about social care, jobs, trees, or anything else. People from all backgrounds are fighting back and we need to unite to achieve a real difference.

Breaking news, 3.3.17: 'Anti-trade union law' charges against the remaining nine Sheffield Trees protesters have been dropped because of "No realistic prospect of a conviction". That means all 14 arrestees have now had charges dropped.

This version of this article was first posted on the Socialist Party website on 2 March 2017 and may vary slightly from the version subsequently printed in The Socialist.