From The Socialist newspaper, 8 March 2017 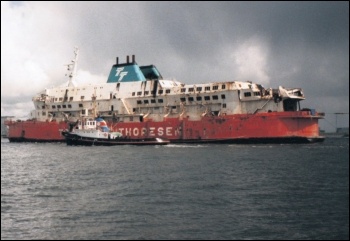 Bosses' profit-driven corner cutting lead to 193 deaths on the 'Herald of Free Enterprise' in 1987, photo by AirSafetyGuy (Creative Commons)   (Click to enlarge)

In a fitting tribute to Geoff, his sister Sue donated his victim compensation award to finance an office for members of the Committee for a Workers' International (to which the Socialist Party is affiliated) working underground in Chile.

The Zeebrugge tragedy was no accident. It was a disaster waiting to happen, based on systemic failures by a company driven to maximise profit. In that sense 'Herald of Free Enterprise' was an apt name.

Sea water poured onto the car deck causing the ferry to capsize into the freezing waters in less than two minutes. If it hadn't sunk onto a sandbank it would've turned turtle with a greater loss of life.

As could be expected several hapless crew members were later blamed for the tragedy, although several others were named for their outstanding heroism. And, as usual, a charge of corporate manslaughter against the company was dismissed by a judge, despite an inquiry identifying 'corporate negligence at every level of the company's hierarchy'.

In 1988 P&O attempted to sack all 2,300 of its ferry workers in Dover over the seafarers' refusal to allow cuts in the workforce which would impact on passenger safety. Free enterprise indeed.

Support the Jobstown defendants: Defend the right to public protest

Why I joined: "In those 16 pages of the Socialist I found more sense and integrity than in the mainstream media"