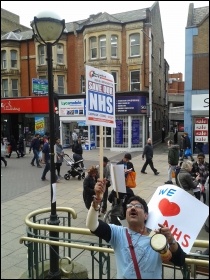 Several hundred demonstrators, including health workers, marched through Ilford on 18 March to stop the closure of the nearby King George hospital A&E department.

Under the Tories' sustainability and transformation plans cuts programme the A&E will close at nights from September and permanently by 2019 with the loss of 240 acute beds. This has provoked anger from people in east London who understand that King George's neighbouring hospitals are also facing hundreds of millions of pounds of cuts by 2020.

Socialist Party placards and leaflets calling for more protests, strikes and occupations to save NHS services were snapped up by marchers who rallied at Ilford town hall for speeches.