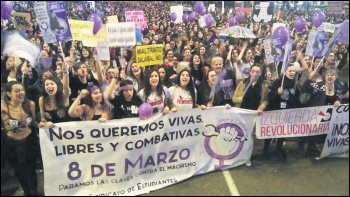 "When I stood on the steps of Downing Street and said I wanted this to be a country that works for everyone - I meant it." Theresa May has Tory rhetoric down.

This was what she spewed on International Women's Day when announcing that a pretty measly £5 million would be put towards helping women back to work after taking time out to raise a family.

Except why would you want to go back to work when the grim reality is that working parents in Britain, especially single parents, will be some of the hardest hit by cuts in the Tory budget? A single parent of two who works 17 hours a week faces losing out on £2,850 a year by 2020.

Researchers said these cuts will have a massive impact on child poverty figures. Figures which this week showed child poverty at its highest level since 2010. A devastating four million now living in relative poverty - an increase of 100,000 in 2015-16.

Household data published by the government showed 67% are from working families, with the biggest surge among children of single parents who work full time.

Despite Tory newspeak, work clearly doesn't pay. On the contrary, this vicious government and its big business mates are doing everything possible to pick the pockets of "hard-working families."

The May government isn't strong. The budget and its cuts aren't set in stone. Already Chancellor Philip Hammond has been forced into a humiliating climbdown on his tax raid on the self-employed.

We can force them back on these vicious cuts that plunge children into poverty - with a collective fightback, including coordinated industrial action and campaigning for a working class political voice.