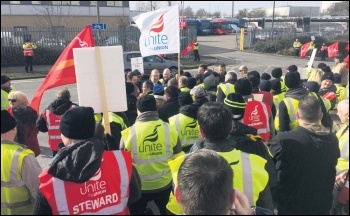 As ballot papers go out in the Unite general secretary and executive elections, the Blairite challenger to Len McCluskey, Gerard Coyne, has shown his true colours. Unite members were shocked when he wrote a column on 21 March in the hated Sun newspaper.

But a day before voting started, he was back in the Murdoch press, this time the Sunday Times. His article "A vote for me stops Unite playing fantasy politics with Corbyn" confirms the character of his challenge.

As Len says in an interview with Kevin Maguire in the Mirror, Corbyn represents an "opportunity to promote an alternative to the devastating austerity that the Tories are placing on the backs of ordinary working people in our communities."

But a Len victory is a vital step in this and it can't be taken for granted. It is a serious mistake for Ian Allinson to have stood in the election and needlessly risk splitting the left vote, potentially opening the door to Coyne.

We disagree with Ian's description of the union under McCluskey's tenure. As Len states in the Mirror interview, "In the past three years we've had 1,000 industrial action ballots and every one got a result with a satisfactory outcome."