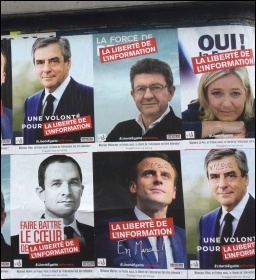 In the forthcoming French presidential election opinion polls show that left-wing candidate Jean-Luc Mélenchon is closing the gap on the three frontrunners. Clare Doyle of the Committee for a Workers' International (CWI) reports on this wide-open contest.

A deep discontent with the existing order is reflected in the dramatic rise in recent days in the popularity of left and socialist candidates. This includes widespread approval of the points made by car-worker Philippe Poutou in a candidates' debate on TV when he attacked the privileges of all the politicians of the establishment, including the Front National's Marine Le Pen.

There has been a doubling of the ratings for Jean-Luc Mélenchon of 'France Insoumise' (France Unbowed) with his strong campaign against austerity policies, taking him to 17% and possibly further.

The official candidate of the ruling so-called Socialist Party (PS), Benoît Hamon, is fighting a losing battle after years of his party's unpopular pro-business policies in government. He has now declared for Mélenchon in the second round!

French capitalism, with all its apologists and representatives, offers no way out of stagnation, joblessness, cuts in welfare and authoritarian government. Mélenchon's campaign, is effectively voicing the rage of the workers and youth of France against the pampered, swindling elite who live in luxury while the majority face austerity and joblessness.

The appeal of this 65 year-old's talk of "a citizens' revolution", has seen his organisation grow to over 300,000 members. His YouTube subscribers number 270,000.

(more than all the other candidates put together) and his rallies draw crowds of tens of thousands. Up to 110,000 marched to the Bastille with him on 19 February - the day of the commemoration of the 1871 Paris Commune.

Although a former Trotskyist, Mélenchon does not talk, as the CWI does, of an alternative, socialist Europe. He also stops short of advocating the key measures necessary for dealing with the multinationals, the banks and the super-rich ie nationalisation of the banks and monopolies and democratic socialist planning. But his ideas and his enthusiasm are undoubtedly what makes him popular.

Behind the volatility and unpredictability of the election campaign is a tense social situation. The state of emergency, imposed after horrific terror attacks, is still in place. In March, new disturbances broke out in the deprived suburbs of Paris and elsewhere.

"Bonfire of the elites"

There is no slowing down in the number of often small but bitter strikes breaking out - in response to attacks on wages and conditions, cuts in services or high-handed attitudes on the part of pampered bosses.

Before the first round of voting on 23 April, the far-right candidate, Marine le Pen, seems certain to get the highest vote. Most polls predict, however, that she will not muster enough additional votes to defeat whoever will run against her in the second round on 7 May. But nothing is ruled out!

France is experiencing "a bonfire of the elites", as the Economist expressed it.

It is unprecedented since the time of President De Gaulle that no representative of the 'traditionally' governing left or right parties will be in the final two! The 'independent' Emmanuel Macron will benefit from disillusioned voters of both camps.

Macron, with a background in banking (Rothschild), favours deep austerity for the public sector and tax reductions for the business sector. He is a neoliberal through and through and, unlike Le Pen and Mélenchon, a staunch supporter of the EU and its institutions.

Le Pen has picked up support from workers and big layers of young people by policies that are seen by some to be anti-austerity and anti-establishment. To others, she is clearly racist and anti-immigrant in spite of her party shedding some of its pro-fascist past. She is pledged to take a vote on the EU within six months of coming to power.

The popularity of the current president, François Hollande, reached an historic low at one point and his party is hugely unpopular among workers.

Last year saw mass movements against its anti-worker labour law reform. After this election and the parliamentary contest that follows in June, the party itself could disintegrate.

The candidate of the Republicans, former prime minister Francois Fillon, also promotes austerity and deregulation, only on a larger scale than Macron. His star has faded the more revelations about his corrupt practices have come to light.

Gauche Révolutionnaire (GR) - the CWI in France - advocates voting for Mélenchon in the first round (and obviously in the second if he defies all the odds to be in the run-off!).

But socialists understand that in the second round, many workers and young people will vote, holding their noses, against Marine Le Pen. The most important task in the period after the election is to build a new mass socialist force from those who have campaigned and voted for left and socialist parties.

In 2002, parties to the left of the PS won nearly four million votes in the presidential campaign - nearly three million for Trotskyist candidates and nearly a million for the Communist Party. But the opportunity for Trotskyists to form a new party offering a clear working class and anti-capitalist programme was squandered.

The most urgent task of the hour in France, as in so many other countries across Europe, is to build a new socialist party of workers and youth.

The next few months will see huge changes in France's political landscape. As the world's political and economic crisis deepens, the legendary combativity of the French working class will light a beacon internationally and, drawing the correct political conclusions, can point a way forward along the road of socialist transformation.