Link to this page: https://www.socialistparty.org.uk/articles/25277 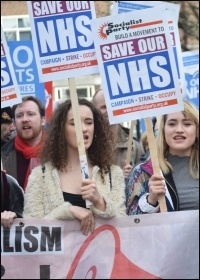 Domestic staff at the Royal London Hospital have had their victory over privateer bosses' attacks on their breaks confirmed.

Management at outsourcing firm Serco had tried to withdraw the workers' 15-minute morning tea break. In response, domestics organised in Unite the Union defied bosses and took the break anyway.

In the face of this spontaneous, collective walking off the floor on 6 and 7 April, management made a major climbdown, but not a complete one. Bosses said they would reinstate the break - pending further 'consultation'.

At a meeting this evening, 12 April, Serco conceded fully. It is no longer going to 'consult', and has simply reinstated the break.