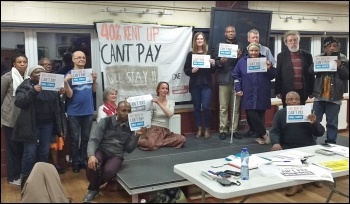 One Housing tenants in east London discussing the fight against their 40% rent hike, photo by Scott Jones   (Click to enlarge)

They have created the One Housing Tenants Action Group to collectively take on One Housing with support from the National Union of Teachers, the Socialist Party, local councillors and other activists. The tenants are confident and determined.

At the meeting they heard from a Butterfields tenant who, with others, successfully fought eviction in 2016. The tenants are planning to march on One Housing's office on 6 May to say 'can't pay, will stay!'