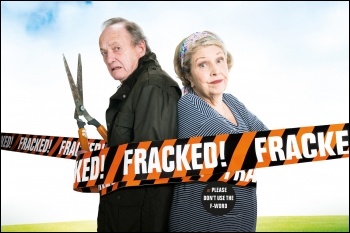 The political play 'Fracked!' is touring nationally and well worth going to see. Although billed as a black comedy, and there certainly were laughs throughout the play, it was so much more political than I was expecting - written by Alistair Beaton, a political satirist.

It begins when an energy company wants to start drilling for shale gas - a process called 'hydraulic fracturing' or 'fracking' - in a village. One of the residents shoots to internet stardom through her speech against a panel member at a meeting proposing it, when she calls him corrupt.

The two lead actors are Anne Reid (Coronation Street) and James Bolam (The Likely Lads) - there are younger actors too! - and all are very good.

What starts as someone believing in the democratic processes of voting and occasionally writing letters to the press and signing petitions becomes so much more. In the end, the only way to fight the developers is by taking direct action. Also shown up are corrupt local councillors.

What I found most impressive was the fact that it was so up to date - the actors must be learning new lines daily - the news headlines were included in many references. That is not something I have seen before on stage.

While maybe a bit too much of the 'nasty' PR company is used to make it appear that actually the energy company bosses are OK guys, it is an interesting and topical play, and puts forward good environmental arguments against the use of fracking for our future energy sources.