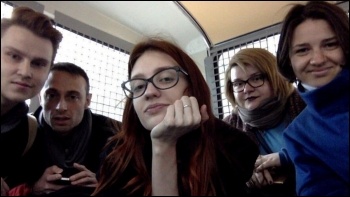 Socialist Alternative (CWI Russia) member Igor Yassin said: "We are writing this update for you from a police van in which we are being kept. We were just detained as we tried to deliver 400,000 signature petition supporting gay men in Chechnya".

Sweden: a community unites against violence and unemployment 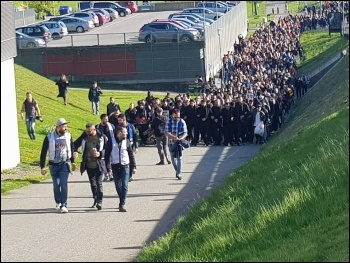 1,000 people, marched following the fatal shooting of a teacher in Gothenburg, led by the victim's family. He was the brother of a Rättvisepartiet Socialisterna (RS - CWI Sweden) member. RS helped mobilise the teachers' union and the tenants' union to join the demonstration. RS member Kristofer Lundberg said: "48 representatives from 42 workplaces, community organisations, trade unions and our party met to discuss how we will work together in this situation to defend safety in our areas and fight unemployment, lack of housing, defend welfare and so on. We will now meet on a regular basis."

Video: Socialist councillor on the role of police in Ireland 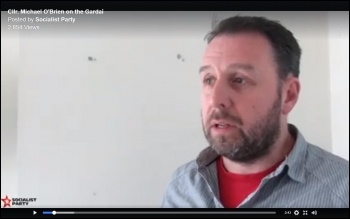 Watch this video to hear Michael O'Brien's take on what the Gardai (police) do in Irish society today. Michael is a Solidarity councillor and Socialist Party Ireland member. His comments are particularly important while we're in the middle of the unjust Jobstown trial. Michael said the Gardai "prioritise policing of austerity and maintenance of the status quo above policing crime".