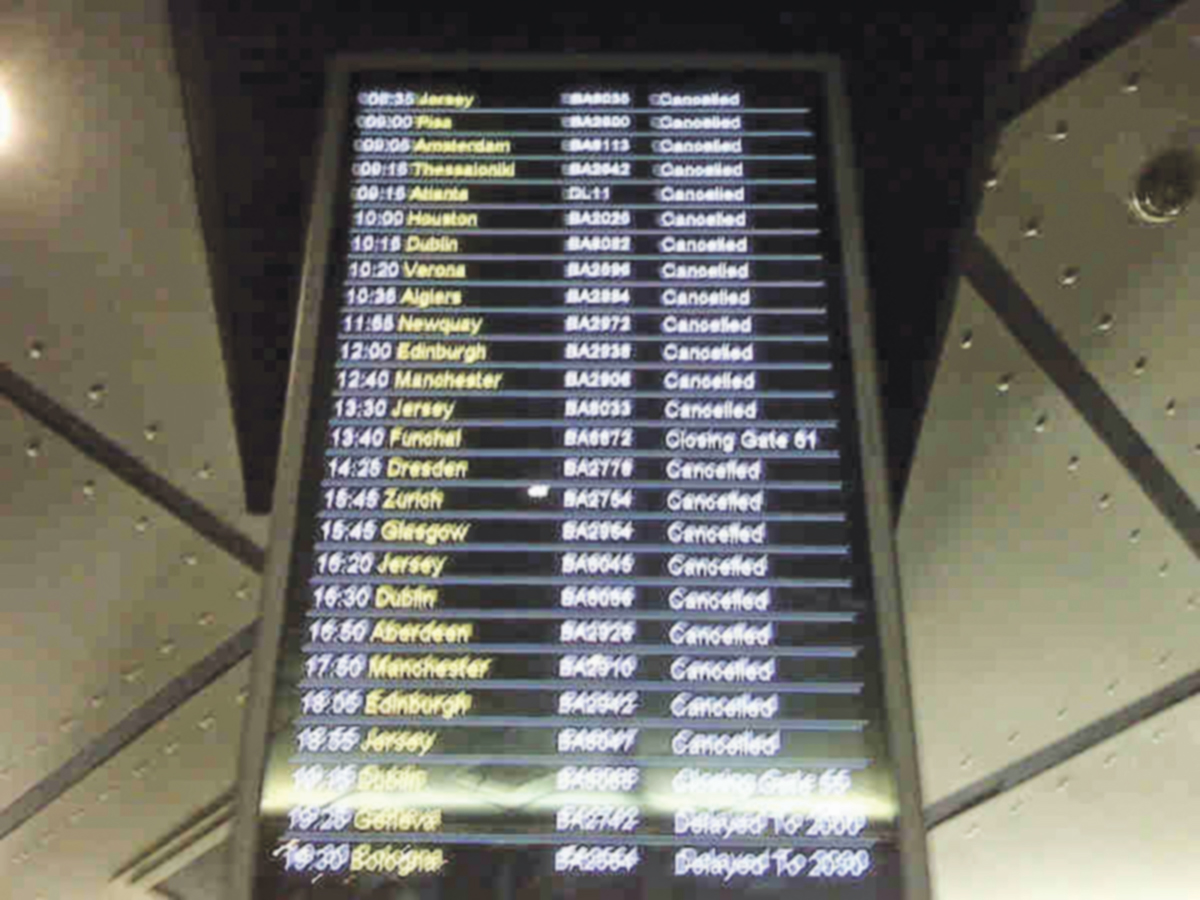 Thousands of British Airways (BA) passengers suffered cancelled flights over the bank holiday period due to a catastrophic computer outage. General union GMB, which organises BA IT workers, has been warning the company of this danger for months. The Socialist spoke to GMB shop stewards at Heathrow Airport about the incident. 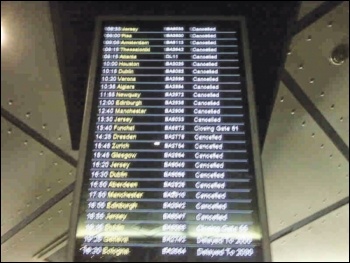 The IT failure meant flights were cancelled for thousands of passengers, photo by Andrew Girdwood/CC   (Click to enlarge: opens in new window)

BA had a major power outage about 7.30am on 27 May. Systems should have had a backup power source, but for whatever reason that didn’t kick in in the way it was expected. So the power outage lasted for longer than expected.

This results in the corrupting of databases. Mainframes don’t appreciate being turned off, they’re not designed for that. It’s not like a PC at home where turning it off and on again is the normal solution to any bug.

Mainframes work with data in real time, managing masses of data almost instantaneously. Therefore interruptions of power cause huge problems. Data gets lost or corrupted or put in different places.

And a lot of computing is magnetic – poles are created through the use of electricity. So if the power goes down, you drop a lot of information.

Why did it take so long to fix?

In the past, that would have been resolved by as soon as you got the problem, you’d get 15 or 20 of the most likely people from the department in a room to brainstorm the problem.

What BA has done in allowing up to 600 very skilled IT workers to be made redundant in the last 18 months – and their work outsourced to cheaper third parties in south Asia – is that you’ve lost 600 people’s experience and knowledge from the airline.

So problems in the past would be resolved by people with the knowledge and experience saying “oh, I remember how we resolved that in 2002”, or “that problem is very like what happened in 2005”, and so on.

Why did BA get rid of these vital workers?

What’s crucial to this is that Alex Cruz, when he came into BA as chief executive, decided to deliberately take a greater risk. It was an equation where they were prepared to swap risk for cost.

That’s why we’re in this position. They pushed the risk side of the equation in order to reduce the cost side. Their aim was to save €91 million in the running cost by January 2019.

So they’ve lost all their ‘savings’ in less than a day’s outage. God knows where they’re going to end up in terms of the final cost, in terms of compensation and reputation. The final bill is likely to be far greater than any savings they were hoping to make.

We pointed this out to them constantly, at every negotiation. We were trying to save jobs at each point.

So is outsourcing the only problem?

It isn’t just about them closing down the IT department and shipping support out to south Asia. They’ve also been bringing in workers from south Asia on ‘tier two’ visas to displace workers already at Heathrow.

You’re only supposed to use tier two visas because you can’t get the skills from within the national economy. The skills are here. They’re deliberately making BA IT workers redundant and replacing them with people on tier two visas.

On average, BA IT workers are on roughly £40,000 a year. Workers on tier two visas – they could be earning a quarter of that. The bosses are relying on the super-exploitation of some of the workforce to undercut conditions for the rest.

It’s a lie, Theresa May and the Conservative Party always talking about investing in high-skilled jobs. They allow multinationals and FTSE 100 companies to do what they like and ignore the law.

The GMB has written twice – long letters, chapter and verse – to the Home Office on this issue. The Home Office just says ‘BA knows what it’s doing, we trust big companies’. We’ve drawn a blank.

Has there been any political support?

Richard Burgon, he’s a pro-Corbyn Labour MP in Leeds – he was very supportive, he got it. John McDonnell was down at a mass meeting we held last year, and Chris Newby and Rob Williams from the Socialist Party were there too.

We had a march. We’ve been anticipating this for quite some time.

Has the EU had any impact on this?

The lies from the Labour right, who’ve eulogised about staying part of the EU to safeguard workers’ rights, are nonsense.

Being within the EU has not stopped well-paid IT jobs in Britain going in their tens if not hundreds of thousands to south Asia, where wages and conditions for those workers are far worse.

We have struggled to stop this from within our industry because of the anti-trade union laws, which the EU also did nothing to stop. The laws in Britain and the EU are so weak in terms of protecting jobs that BA has been allowed to do whatever it likes.

This has all been achieved within the EU, aided by legislation from the parliaments in Westminster and Brussels, safeguarded by the European Court of Justice.

How could a Corbyn-led government address this?

We’re happy to be working side by side with anybody from anywhere in the world – as long as it’s on the same terms and conditions, and the same rates of pay.

Jeremy Corbyn’s manifesto promises to “ensure that any employer wishing to recruit labour from abroad does not undercut workers at home – because it causes divisions when one workforce is used against another.” We agree with that.

But it also commits to “retaining the benefits of the single market and customs union“, which come with all sorts of rules and regulations designed to help company owners push down pay and conditions. So this is a contradiction. He’ll have to stand up to the EU and not accept their rules.

Any government that does write new laws can be faced with clever companies navigating their way around them. So fundamentally this also has to be about workplace organisation. Jobs, pay, terms and conditions – ultimately, these must also be defended in the workplace by the workers themselves.

Corbyn’s manifesto includes a lot of measures which would facilitate better workplace organising. That’s a good a start. The leadership of the unions needs to match it with determination to lead effective action.

This version of this article was first posted on the Socialist Party website on 30 May 2017 and may vary slightly from the version subsequently printed in The Socialist.