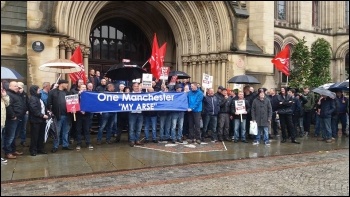 The three-day a week strike by housing maintenance workers in Manchester is continuing. Workers expect a long battle, one for which they are prepared.

Pickets are rightly outraged at the huge disparities - £5,000, £6,000 even £7,000 - in the pay of workers doing exactly the same work in the same city. Petty penny-pinching, such as demanding that workers pay for damaged screens on the hand-held electronic PDAs which direct them to their jobs, only adds insult to injury.

Management are using sub-contractors on strike days, and the use of PDAs make this form of strike-breaking easier, but it's costing employer Mears a fortune.

The dispute has arisen from decisions by the Labour council to outsource housing maintenance - at a time when many councils are considering bringing it back in house.

Colin Pitt, Unite steward, is a Labour Party member but is severely critical of Manchester's Labour administration: "We have sat down on two occasions with the council's deputy leader who was made aware in no uncertain terms where the dispute would end up. He did not even respond to our last meeting and six weeks later simply handed the contract to the company we're in dispute with."

Mears workers have seen too much of the cosy relationship between Labour councillors on inflated allowances and housing association chiefs on six-figure salaries. The Blairite councillors in Manchester town hall jumped on the 'Northern Powerhouse' bandwagon, despite George Osborne's cuts and privatisation agenda. Jeremy Corbyn's campaign has much to attract workers but the actions of Labour councillors are making it harder, not easier, to win.