Link to this page: https://www.socialistparty.org.uk/articles/25589

Huge crowd turns out in Gateshead to hear Jeremy Corbyn 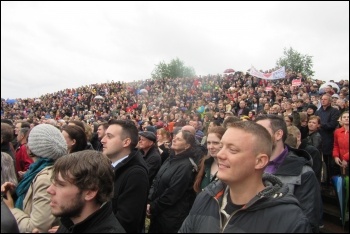 Young people were clearly in the majority among the crowd, and were so keen to see Corbyn that they weren't prepared to wait in the over-flow area (where there was a sound system) but clambered up a grassy bank to ensure they got a glimpse of him.

It is abundantly clear that Corbyn's policies - £10 an hour minimum wage, banning zero hour contracts, abolishing tuition fees - resonate with young people. They recognise that these policies could begin to transform their lives. 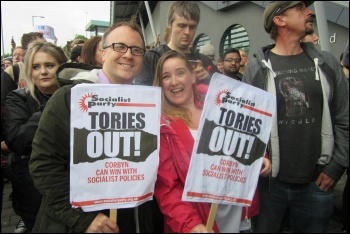 Furthermore, these young people have taken the first step to ensure these policies come into fruition by registering to vote. Not only are they going to vote for Corbyn, but have been explaining to their friends, their families, and workmates the necessity to get Corbyn elected.

When Corbyn came on stage the atmosphere was electric. People who couldn't see him held their phones aloft to capture him on their mobiles. Others stood on tables and walls to get a better view. Every time he mentioned Tory cuts the crowd booed, this was followed by loud cheers whenever he put forward anti-austerity measures.

We heard later that in the Basque country and Spain people were posting pictures of the event - which shows the huge potential for working-class solidarity.