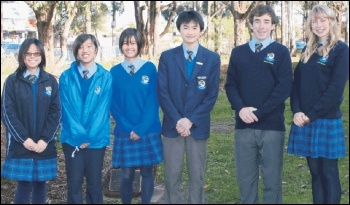 In the current political climate, school uniforms may be a seemingly trivial topic. However, the recent heatwave left many school children suffering during exam season.

While some schools in leafier areas rolled out the summer uniform of polo shirts and shorts, others didn't - partly because of parents struggling with the cost of two uniforms a year for each child.

A strict policy of wearing school uniform and the disproportionate consequences which can follow disobedience, has been harmful to students learning. In Exeter, some male students protested their school's 'no shorts' policy by wearing skirts, causing rules on the matter to be reconsidered.

But elsewhere the experience of school students was not so charming - many felt they had to wait around after school hours to avoid the three o'clock heat.

The punishment of such small acts of defiance, like altering uniform, contributes to an attitude that pushes many young people away from a good education and creates an atmosphere that prepares young people for conforming to rigid hierarchy at work too.

To improve our education system, schools need to become more lenient in regard to uniform as part of an effort to develop a more cooperative and a more beneficial learning environment.

Decisions on uniform policy should be made democratically by students, teachers and parents.