Link to this page: https://www.socialistparty.org.uk/articles/25778 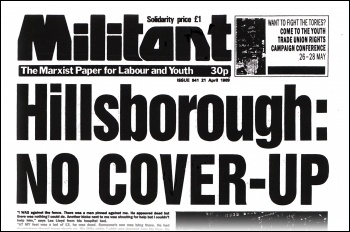 Hillsborough deaths: six charged due to determination of justice campaign

More than 28 years after 96 people were unlawfully killed in the Hillsborough stadium disaster, charges are finally being brought against the policeman in charge on the day and five others.

In the aftermath of the tragedy, the British establishment deployed the obscene tactics of blaming the dead who had been trapped by unsafe stands and police inaction. They tried to discredit the fans with the most terrible lies, making them seem inhuman and unworthy of sympathy.

Disasters like Hillsborough happen because of the drive for profit and utter contempt for working class people from those in power. Attempts at cover-ups are an inevitable consequence when a super-rich elite controls the state, the legal system and the media.

We're already seeing the beginnings of a cover-up of the Grenfell Tower fire. If we don't want to wait 28 years for the truth and for those responsible to be held to account, then we must fight for an independent workers' inquiry to take place now, led by trade unions and residents, which would look into everything that has happened and expose the crimes that have been commited in the interest of making cuts and protecting profits.

We also have to fight for the necessary resources to be made available to prevent future such disasters.

At the time of Hillsborough, I was a 22-year-old Liverpool season ticket holder. This qualified me for a ticket in the Leppings Lane pens where the crush occurred.

But the day before the match I got a ticket from a friend for the seats above. I sold the one for the pens to another Liverpool fan outside the stadium.

He thought I was a tout and was expecting to pay a big premium. I only charged him the price on the ticket and explained why it was going spare. He was so pleased he gave me a big hug.

When photographs of the victims were published weeks later, I scrutinised their faces to see if he was one of them. To this day I can't be sure.

Like many people in the city I felt a deep sense of grief. I know very well how much pain and outrage was caused by the lies told in the cover-up.

If it hadn't been for the utter determination over many years from the families and the justice campaign, then the truth would never have been told and nobody would have been held to account.

The victims of Grenfell must not be put through the same ordeal.