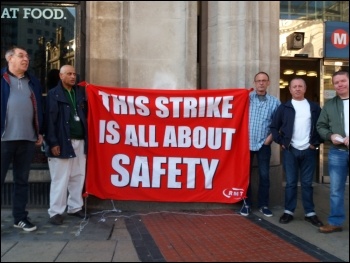 Continued coordinated action against driver-only operation on three rail networks has continued, with strikes on Merseyrail, Northern and Southern starting on 8 July.

There was a good turnout of pickets at Merseyrail's Kirkdale Depot on the morning of 8 July, in support of the RMT's strike against the introduction of a new fleet of driver-only operated trains. Ironically the strong show of pickets was produced in part by the fact that management had introduced secret locations for scabs to report for work, so some strikers who might just have stayed at home on the strike day, went to the picket lines to ensure that they were seen to be on strike! Most vehicles that passed hooted their horns in support. The local radio station phone-in programmes demonstrate overwhelming public support for retaining the guards on the trains.

Pickets were out on 8, 9 and 10 July at Skipton railway station. Public reaction to the strike has been more positive than that portrayed in the majority of the press.

75% of passengers are concerned about their safety if guards are removed, yet this is not reflected in the media, which depicts railusers as wholly inconvenienced and unsympathetic to the strike.

We need more people showing solidarity at picket lines and meetings, posting on social media, informing the public that it's not about money. It's about having skilled staff on hand in the event of disability access problems, or accidents, or sexual assault, or the threat of terrorism.

RMT members are taking three days of strike action from 8 July against the introduction of driver-only operated trains on Northern Rail.

Even in the early hours, around a dozen RMT members and supporters were picketing and leafleting outside Leeds train station.

Reps commented that while RMT members are prepared to take whatever action is needed to defeat this, really the whole trade union movement should be organising to force the Tories out and replace them with a Corbyn government committed to keeping guards on trains, renationalising the railways and scrapping the public sector pay cap.

All eleven RMT members that are guards at Harrogate station went on strike against Northern Rail for the three days. Simon Black the RMT branch secretary was up-beat with the response of members and the public.