Link to this page: https://www.socialistparty.org.uk/articles/25861 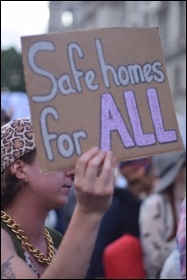 The latest news about the Grenfell Tower fire disaster continues to reveal Kensington and Chelsea Tory council shenanigans in its abuse of the worst off in the west London borough.

It was revealed this week that the council had received last year alone £50 million from developers "in lieu of" not having to meet the developer's obligations to have a certain percentage of new developments as 'affordable homes'.

To those of us involved in housing campaigns this is not news; in my own borough of Southwark the Labour council over the last period has received some £300 million from developers (S106 payments) 'in lieu of building affordable homes'.

When I challenged the cabinet member for regeneration Mark Williams at a meeting of the Southwark Group of Tenants Organisations on 17 July over what the council was doing with the money, he dodged the question (and not for the first time).

The debate was about a group of residents on the Ledbury estate in Southwark who have been kicking up for years about the massive cracks in the fabric of their tower blocks. These cracks were recently identified as dangerous by London Fire Brigade inspectors. The council was forced (in the light of the Grenfell fire) to bring in "fire marshals" but as it turned out, and was raised at the meeting, these were completely untrained and had no idea what to do in the event of a complete evacuation of the towers!

The councillor had said that Southwark council could not afford to requisition the huge amount of empty properties built by developers for overseas clients. This was "because the housing revenue account was ring-fenced" and couldn't be used to requisition new homes for the Ledbury tenants.

New developments of apartments along the south bank of the river Thames cost anywhere between £1 million and £2 million and none of them have affordable homes. This leaves aside what is considered 'affordable' in the first place, often up to 80% of the market rate.

The Southwark Group of Tenants Organisations meeting revealed the huge anger of tenants across the borough and indeed London wide over housing policy which only benefits property developers and landlords.

Grenfell was a game changer and it won't stop there.

This version of this article was first posted on the Socialist Party website on 20 July 2017 and may vary slightly from the version subsequently printed in The Socialist.