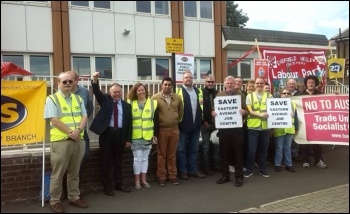 The Department for Work and Pensions (DWP) announcement that Sheffield Eastern Avenue job centre is a confirmed closure site has only made the staff there, members of the PCS civil servants' union, even more determined to keep it open.

Having campaigned since February and already taken six days of strike action in May and June, 50 PCS members took another five days of strike action from 17-21 July. Pickets were well attended every morning by strikers and supporters. The job centre could only offer a token service by bringing in managers and staff from other sites.

This strike is gaining national significance as the staff are not only fighting for their own jobs but to keep the local job centre open in one of the most deprived areas of the city of Sheffield. Award winning film maker and director of "I, Daniel Blake", Ken Loach has publicly supported the campaign.

After the DWP announced the confirmed closures, two more PCS branches have requested ballots for industrial action. There is a PCS DWP delegate meeting to consult over possible national action. And Eastern Avenue members expect to be on strike again in August.

The University and College Union (UCU) has been banned from attending a meeting that was hosted at Teesside University on 21 July.

The meeting concerned the university's decision to force all staff to "justify their work" and reapply for their jobs or face redundancy over the summer.

No explanation has yet been given by Teesside University to make clear the rationale behind this, though what is clear is that this process is highly likely to be damaging to the morale of its staff. In a double whammy by the university, and to further add insult to injury, the 27 professors (the vast majority who are members of the UCU), have now been told they may only send two representatives in their place!

The Socialist Party agrees with the UCU that the decision to deprive their staff of fair and democratic representation is unacceptable.

Challenging both the thoughtless decision and speculative timing, over 750 academics have now signed an open letter condemning in the strongest terms the university's plans and decision.

A statement released by UCU regional official Jon Bryan said: "Facing a summer of uncertainty is bad enough. But then to be told that your trade union cannot be part of the collective consultations is like kicking you when you are down".

He confirmed that the UCU would be doing all that it can to challenge the university and to support its members. "Not being allowed in will not stop our voice being heard", he said.

The Socialist Party stands in solidarity with UCU and will continue to support them in their struggle.