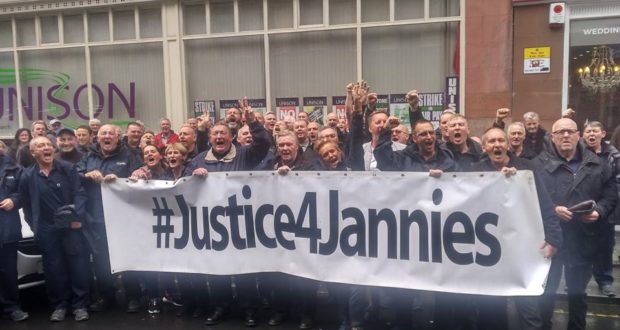 The dramatic rise of the Scottish National Party (SNP) has been thrown into a sharp reverse recently. The partial collapse in the electoral support for the SNP at the June 2017 general election – a loss of 21 of their 56 MPs and 500,000 votes – speaks of a growing mood of disappointment in a party that claimed to be “anti-austerity”.

In practice the opposite has been the case, as Socialist Party Scotland has explained on many occasions. By implementing spending cuts on an unprecedented scale in Scotland, the SNP leadership has begun to be exposed in the eyes of broad sections of working class and young people.

Even though the 2014 independence referendum was narrowly lost, the SNP gained a landslide victory in the 2015 Westminster elections as hundreds of thousands of radicalised independence supporters rallied to the ‘anti-establishment’ SNP.

The growth of this middle class-led radical nationalist party to over 100,000 – including many new working class and young members – was itself a distorted reflection of the space for a mass workers’ party in Scotland.

The SNP has never been a left party. SNP policy has generally opposed tax rises on the super-rich and big business and indeed for decades advocated major tax cuts for corporations in their blueprint for an independent Scotland.

It is true that as Labour stampeded to the right under Blair and Brown the SNP successfully positioned itself to the left of New Labour, making significant electoral gains as a result. However, its radical populism has, so far, never gone beyond a stout defence of capitalism, albeit of a ‘fairer’ variety.

An SNP-led Scottish government for over a decade, and now in control of many local councils, has seen them largely act as a conveyer belt for Tory austerity.

A marked turn to the right by Nicola Sturgeon and the SNP leaders followed the Brexit vote of June 2016. On Brexit, the SNP’s position is at all costs to fight to retain access to the single market and the customs union – ie in the interests of big business.

While the 2014 referendum was fought as a proxy for opposition to vast inequality and cuts, and was a mass expression of class anger at the establishment, today Sturgeon et al have sought to frame a second referendum as being necessary to “protect access to the European single market”.

Alongside the role of the SNP in making cuts, the prioritisation of big-business interests is undermining the SNP’s base of support among the working class in Scotland.

This is especially pronounced among the one third of pro-independence supporters who are opposed to the EU. At the June 2017 Westminster election the SNP lost 40% of their voters who backed Leave in 2016.

Socialist Party Scotland, along with the RMT trade union, made a socialist, internationalist case for exit from the bosses EU during that referendum.

The conduct of SNP politicians has also come under increasing scrutiny – the overwhelming majority of who are drawn from the middle class, managerial, small and medium business community.

Dismay is an accurate depiction of the mood of many of those who looked to the SNP following the 2014 referendum. This change in outlook has also impacted on the prospects for a second referendum.

SNP leader Nicola Sturgeon “reset” the Scottish government’s plans for a second independence referendum at the end of June following the party’s heavy losses at the general election. Their plans to legislate immediately for a second referendum, voted through the Scottish parliament in March 2017, have now been shelved.

A deep polarisation has now set in. Scottish Tory leader Ruth Davidson’s single issue campaign in the general election – no to indyref 2 – effectively mobilised a large part of the anti-independence vote from 2014, allowing the Tories to win 13 seats at Westminster.

Significantly, support for independence is still at the same level as it was in 2014, around 45%, a historic high, despite falling support for the SNP. Yet it is clearly the case that the intensity of the mood on the national question has dipped.

No longer do a section of radicalised working class and young people currently believe that the SNP offers a real alternative to fighting austerity. And this has had an impact on the immediate prospect for a second referendum as the SNP has moved in a more explicit pro-business direction.

Labour’s modest recovery in Scotland, winning back six of the 40 seats they lost in 2015, was a pale reflection of what would have been possible. Continuing to oppose independence outright and a second referendum is a huge barrier to winning over the many anti-austerity workers and young people who are attracted to Corbyn’s left policies.

In practice the Labour left has carried on with a policy that is in reality identical to that of Kezia Dugdale (Scottish Labour leader) and the anti-Corbyn Labour right.

The SNP gained massively as a result by championing democratic rights but also posing as an anti-austerity alternative to Labour. The consequences of Corbyn allowing the Labour right in Scotland to frame the manifesto on Scotland and indyref 2 for the general election was to hugely limit the potential gains they could have made.

There is no solution to any of the problems we face – poverty, deprivation and cuts – within the crushing straitjacket of capitalism. It is this approach that Socialist Party Scotland argues that the trade unions, the Corbyn movement and the socialist left should adopt.

A serious struggle must be waged by the Labour left to wrestle control from the right wing in Scotland. This should be allied to a pledge that under the new leadership all Labour’s elected politicians must refuse to vote for cuts in councils, the Scottish parliament and at Westminster.

The trade unions who are affiliated to Labour should have their full rights restored. In addition, the party should be opened up to all socialists and left and anti-austerity activists to join, including those who were expelled in the past.

Given the reluctance of the Labour left to challenge the out-and-out capitalist elements in their party, we must continue building an electoral alternative to cuts and austerity. While of course this means not standing against left Labour candidates who pledge to fight cuts, in most cases that is not currently the case.

Since 2010 Socialist Party Scotland has pioneered, alongside the RMT union, the building of the Scottish Trade Unionist and Socialist Coalition (TUSC) and local anti-cuts groups to stand in elections. We would appeal to trade unions and left activists to discuss how we can take this further.

The building of organised and coordinated mass struggle by the trade unions and communities in order to defeat austerity is also essential. The recent victory by the Glasgow janitors shows what is possible, as did the recent victory by college lecturers over pay.

Socialist Party Scotland has always opposed the SNP leaders and their pro-capitalist policies, including during the referendum when we fought for a Yes majority.

We did not make the fundamental errors of groups on the left who to one degree or another gave uncritical support to the SNP, both during and since the 2014 referendum.

The key task facing the working class, young people, the trade unions and the left is to build a mass combative movement to end austerity and oppose all the parties who inflict it.