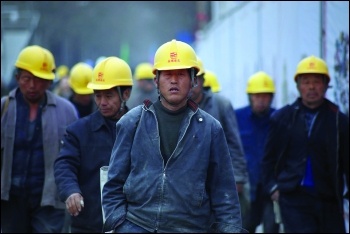 The following article is from an introductory speech on China by Hayashi to delegates attending the recent Committee for a Workers' International (CWI) summer school in Barcelona.

In 2016, there were 2,663 strikes in China, according to the Hong Kong-based NGO China Labour Bulletin. For the first time, the combined numbers of strikes in transport, services and the retail sector was more than in manufacturing industry.

Service sector jobs are even lower paid and with less job security than manufacturing jobs, so it is growth based on the informal sector.

These workers have no contracts or their contracts only exist on a phone app and can be changed at any time. But this technology is also increasingly a platform used to link-up strikes.

In manufacturing industry, unpaid wages and social insurance are the main cause of workers' protests. In 2015, the total amount of unpaid wages was 27.2 billion yuan ($4 billion). Migrants are the majority of the labour force in construction and manufacturing.

China has the most dollar billionaires in the world - 594. In China's fake parliament - the National People's Congress - there are 100 billionaires! It's the world's richest parliament. At the same time, workers' average monthly salary is $475.

Around 280 million migrant workers have left their home town and go to other cities in China to work. However, as factories have closed down due to the economic crisis, unemployment rates have increased and real wages stagnated. The coastal cities are very expensive places to live and many migrants can no longer afford to work there.

Migrant numbers are falling and this trend can make workers more confident to struggle as they can get greater support in their own home town.

The Institute of International Finance puts China's debt in 2017 at 304% of GDP (total output). This is an extremely high level and the increase in the past decade, since the global capitalist crisis began, has been very rapid.

In 2008, China launched a huge stimulus package to inject cheap credit into the economy. Many local governments and state-owned companies borrowed huge amounts of cheap loans to expand investment. But this led to the accumulation of debt.

The Chinese regime can order the state-owned banks to implement its policies. This has allowed China to accumulate a much higher level of debt without a financial collapse. But this situation cannot continue forever.

President Xi Jinping wants to launch economic reforms to channel more private capital into state-owned companies. His economic agenda is to allow more market competition, hoping to let some indebted small and medium-sized state-owned companies default. This is to reduce overcapacity and increase the efficiency of capital (reducing wasteful investments) and to clear the unsustainable debt.

But, if implemented, this programme means a further slowdown of economic growth. This explains why Xi has in practice rolled back on economic reform by injecting even more credit into the economy.

It also means that if the Chinese government uses the same stimulus measures to deal with the next economic crisis, the effect will be much less. So the government finds it harder and harder to soften the effects of crises.

Housing is absolutely unaffordable. In first-tier cities like Beijing and Shanghai, for instance, the price for one square metre of property at average housing prices costs a year's average income. In cities like New York and Tokyo it would cost buyers a month's income.

Speculators are increasingly investing in the housing sector because there are no other profitable sectors and the stock market is seen as too risky. This means that if China's housing bubble bursts it will have a bigger effect on the banking system even than in Japan in the 1990s.

With China's low household consumption rate, huge debts and deflation, in the longer term China is likely to follow the Japanese model of low growth or stagnation. If this happens it will cause a bigger political crisis because of the much wider wealth gap and poorer social protection system compared to Japan.

The Chinese regime's foreign policy is linked to the internal situation and potential for political and economic crises. Xi needs to present himself as a 'strongman' using nationalism to channel popular discontent away from his own policies.

China at this moment has gained the upper hand over the US in the South China Sea conflict. Privately, US strategists accept they cannot reverse China's militarisation of the 'islands' it has built to secure its dominance in the disputed waters - that can only be achieved by war.

But the Chinese economy has also outgrown its national market, a problem that becomes more acute given the international situation, with globalisation in reverse and the rise of protectionism. These processes are reflected in many contradictory ways in relations between the Xi and Trump governments, geopolitics, and China's push for the 'One Belt, One Road' - Obor - economic plan.

Obor is Xi's plan to link 65 countries - which make up 55% of global GDP, 70% of the world's population and 75% of global energy supplies - into a China-led economic sphere.

This is 'imperialism with Chinese characteristics' - it copies the state capitalist investment model from China to build infrastructure in the Obor countries, but also locking these governments into debt-dependency on China.

China will issue loans to these countries through its new Asian Infrastructure and Investment Bank (AIIB) and other financial agencies, and enable it to export the debt burden from China.

Obor countries include many that face military and security crises, terrorism and civil wars - countries like Pakistan, Afghanistan, Burma, and the central Asian states. That's why the Chinese regime is considering deploying or employing military forces in these countries to protect its assets.

There are already rumblings of mass resistance over land grabs, pollution, corruption and national oppression in several of these countries, which can also be reflected in heightened anti-China and anti-Chinese nationalist moods.

This points to political upheavals in the future between pro- and anti-China wings of local ruling elites. Taken together with the economic risks, this can lead to 'imperial overstretch' which, instead of saving the Chinese regime, can trigger economic and political crises in China.

More people are now being charged with the crime of 'subversion'. This includes NGO staff and human rights lawyers who have been arrested in recent crackdowns.

The liberals in China do not stand for the overthrow of the authoritarian regime. They do not put 'radical' proposals like free elections, but only very modest prescriptions, eg fewer media and internet restrictions.

Facing an increase in workers' strikes and mass protests, state repression is the most serious since the 1989 Tiananmen Square movement. For example, all newspapers (around 2,000) must now follow the orders of the central government propaganda departments on reporting political news. The wording must be exactly the same.

State repression is also extending overseas. The regime wants to show its power to increase its control over Hong Kong and Taiwan and block ideas of independence.

The regime's 19th 'Communist Party' congress later this year will see a five-yearly change of leadership. Behind the scenes a sharp power struggle is being fought among the ruling elite.

Xi is due to stay in power for five more years but he also wants to expand his power, promote his supporters and weaken all other factions.

The factional struggle within the regime is not at all about political ideas or programme. It is about protecting the interests of different factions, with their power based on their regions and sectors of the economy.

Xi Jinping is forced to try to centralise power within the Chinese state because of its weakening grip over regional governments and their increasing unwillingness to follow Beijing's orders on economic policy.

The Chinese regime's fear is that any small reforms will trigger mass revolutionary waves and hasten its overthrow. They fear the territorial break-up of China under these conditions, and that is not completely unrealistic.

The ideas of Trotsky's permanent revolution are more applicable in China today in the struggle to transform what is a unique form of state capitalist dictatorship because the capitalist class is extremely dependent on the current state; the remaining capitalist democratic tasks (ie democratic elections, resolution of national question, etc) must be carried out by working class people.

However, the working class will not stop at bourgeois democratic change but proceed to carry out a socialist revolution.