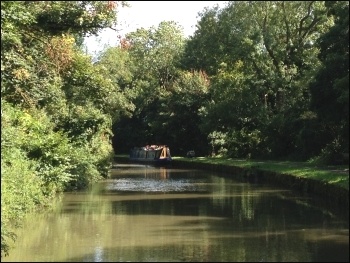 Moving a narrowboat   (Click to enlarge: opens in new window)

Liveaboard boaters being forced off the waterways

The Inland Waterways Association (IWA) last year renewed its suggestion for a 1,500% increase in miles that continuous cruisers (people without a home mooring) would be expected to travel in order to be able to renew their waterways licence. There are over 35,000 licensed boats on the canals and rivers – more than at the peak of canal use during the industrial revolution – and over 5,000 of these are without a home mooring.

Although the law simply states that boats without a mooring must be ‘genuinely navigating’, the enforcement agency, the Canal and River Trust (CRT), has imposed distances of 15-20 miles to be covered over the duration of a 6 or 12 month licence (although it is believed that the last month of cruising does not contribute to this total). The IWA would like this figure to increase to 300 miles, despite there being no legal basis for this.

The UK-wide housing crisis has led to an increase in the number of boats on the canals as more and more people turn to life on the water as an alternative to astronomically high private rents and the huge deposits now required to get a mortgage agreement. However, this has resulted in increasing pressure being put on facilities for boaters.

Bizarrely, among the measures taken by the CRT to deal with this has been the removal of already over-burdened resources previously available to boaters – including removing 40% of litter bins in a bid to ‘decrease’ rubbish left on the towpath. This backwards logic is typical of the CRT, a charity which pays its head, Richard Parry, £188,600 a year, while mooring rangers and lock keepers are increasingly advertised as ‘volunteer’ positions.

The overall upkeep of the waterways has faced cuts year after year. When managed by the publically owned British Waterways (BW), the annual grant given to BW by the government reached £76.6 million in 2003-04. This was reduced to £58.9 million by 2010-11, the year prior to privatisation – the 2012 handing over to the CRT.

The last accounts of the CRT show a government grant now down to £49.6 million. The CRT supplements the grant by collecting hundreds of pounds a year from every licence fee payer, in addition to receiving donations from benefactors and members of the public, plus property and investment income.

The National Bargee Travellers Association (NBTA), which represents itinerant liveaboard boaters, has already rejected proposals by the CRT to increase licence fees and has stated that the CRT’s recent report on the issue was “shambolic” as it “unfairly blames boaters without home moorings for congestion”. It is clear that both the CRT and the IWA would like the waterways to be reserved for ‘leisure boaters’ who holiday on the canal, rather than people whose boat is their permanent home – many of whom live in poverty as statistics show.

Liveaboards include key workers such as teachers and nurses who have been forced out of ‘traditional’ homes on land due to low wages. It is clear that expecting these people to travel ever greater distances every year outside their home area would impact badly on public services. It is also very damaging for liveaboard children who need to be near their school and community.

If continuous cruisers don’t move often enough and far enough, they firstly have their licence period restricted (with a higher monthly licence cost a consequence of this) and ultimately they face having their boat confiscated.

‘Get a home mooring’ is the advice of the CRT to people who need or want to stay in one area, but in parts of the country like London, or on the Kennet and Avon canal near Bristol, there are no affordable long-term moorings available.

It is obvious that boating organisations like the IWA and CRT are attempting to force boaters off the waterways who cannot afford – or even find – long-term moorings. There is also an arrogant and dismissive attitude shown towards liveaboards for daring to live in a way that is viewed in establishment circles as harming capitalism’s notions of civility and society.