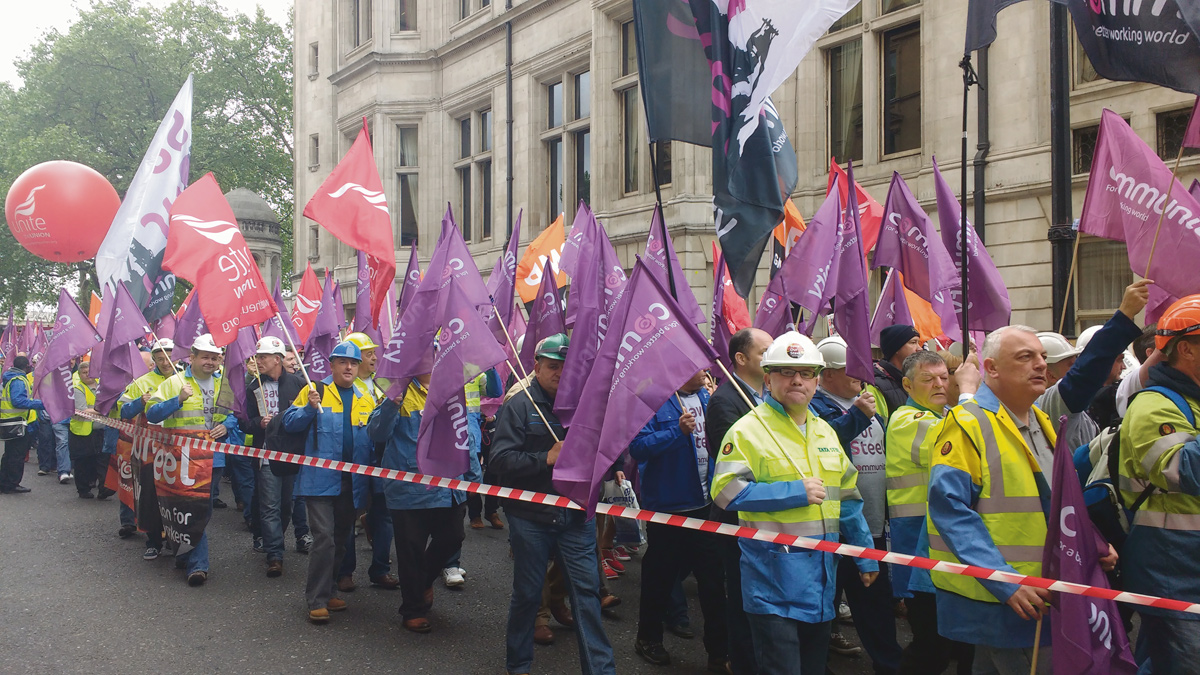 Tata Steel workers marching for their jobs – Single Market treaties aim to prevent nationalisation and subsidies which could save them, photo Scott Jones   (Click to enlarge: opens in new window)

The European Single Market is a major barrier to any incoming socialist or anti-austerity government.

The capitalist establishment across Europe is wedded to privatisation and austerity. And it can rely on Single Market treaties and EU law to impede nationalisation and state investment while ramping up privatisation.

The 2009 Lisbon Treaty is the legal framework that applies to all Single Market member states.

Article 120 of the treaty requires member states to “act in accordance with the principle of an open market economy with free competition” – compulsory Thatcherite economics.

Articles 107-9 bar member states from government aid “which distorts or threatens to distort competition.” This is designed to block substantial public investment.

Labour proposed a £35 billion subsidy to save 4,000 jobs at Port Talbot and prevent the death of domestic steel making. But this would distort competition, and so could breach the treaty.

While socialists would promote nationalisation rather than subsidy, a Corbyn-led government would fall foul of EU law if it wished to prevent sudden closures and redundancies through state support.

The unelected European Commission ordered the Belgian government to claw back €211 million in subsidies given to (unsuccessfully) prevent the collapse of steel group Duferco. The Commission declared the aid “illegal.”

Articles 101-6 of the Lisbon Treaty require that “services of general economic interest or having the character of a revenue-producing monopoly” be subject to competition.

This is designed to severely limit nationalisation, and compliance generally requires breaking up and selling off what publicly owned industries are left.

It’s the right of the market to rule. Large-scale nationalisation in banking, utilities or public transport, and many major national investment programmes, would breach the treaty.

But in any case, competition rules mean that even if, for example, the rail industry was only part-nationalised – leaving many of the profiteers in place – it would have to be open to “free competition.” Investing in better infrastructure, more staff and cheaper fares on the state routes would undermine private companies’ competitiveness and so breach the treaty.

For instance, the 1991 First Railway Directive requires that member states “guarantee that railway undertakings are afforded a status of independent operators behaving in a commercial manner and adapting to market needs.”

Any one nationalised rail company would come up against this. Increasing numbers of private rail companies operate even in France, a country incorrectly given by some as a model of public ownership within the Single Market.

But both are decided in the European Court of Justice by wealthy judges, drawn mainly from the ruling classes, “in accordance with the principle of an open market economy with free competition.” Unsurprisingly they have a record of deciding that ultimately private profit trumps workers’ interests.

That’s why we must oppose Britain’s membership.