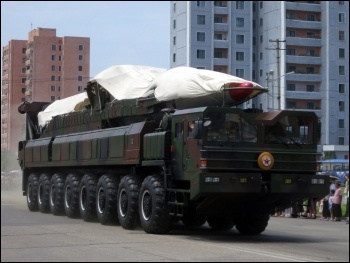 Many people in the region and across the world are understandably fearful that the aggressive actions of the US and North Korea's arms programme can lead to armed conflict, by design or accident, and even nuclear war - costing untold lives and environmental destruction.

Appalling as North Korea's weapon programme is, it is nothing compared to the 6,800 nuclear warheads the US superpower possesses.

And while Trump condemns North Korea's threat to "world peace", it is the US that has unleashed over 20,000 bombs in several countries, so far, in 2017.

The Trump administration gave a chilling response to the North Korea bomb test. The US ambassador to the United Nations, Nikki Haley, declared that North Korea's president Kim Jong-un was "begging for war" and called for an end of all economic links with North Korea.

This is a direct threat to China's interests, which is the main trader with North Korea and its primary oil supplier.

China and Russia's 'freeze for freeze' proposals - the US and South Korea to stop massive military exercises on North Korea's borders in return for Pyongyang stopping nuclear and missile testing and for talks - is dismissed out of hand by the White House.

Both China and Russia border North Korea and are vying with the US in the Eurasia region. They criticise Pyongyang's nuclear arms programme partly because it gives US imperialism the pretext to vastly increase its military power on the Korean peninsula.

They fear the end of the North Korea 'buffer' would see a US-dominated 'reunified' Korea, with weapons of mass destruction on their doorsteps, pointed towards them.

The regime of Kim Jong-un appears to have speeded up its nuclear arms programme to act as a 'deterrent' against a US-led attack.

The grisly fate of Iraq's Saddam Hussein and Libya's Colonel Gaddafi, after they gave up their 'weapons of mass destruction', will have concentrated minds among the ruling elite in Pyongyang.

Whatever sanctions might be brought to bear on North Korea - for which working people will suffer the most - the Pyongyang regime regards nuclear weapons as its only real bargaining chip and chance to survive.

The North Korea regime's bomb and missile testing certainly compounds the risk of conflict but the main culprit for creating this dangerous situation in north east Asia lies with the aggressive, reckless Trump administration.

US president Bill Clinton initially considered using military force against the North but the human and economic cost involved caused a swerve in US policy and a negotiated 'Agreed Framework' with North Korea.

The hawkish George W Bush administration ditched the Agreed Framework and declared North Korea to be part of an "axis of evil". 'Six Party Talks', begun in 2003, failed under a welter of mutual suspicion and distrust between the US and North Korea.

After the 3 September North Korean bomb test, Trump accused South Korea of "appeasement" and raised doubts about continuing a US-South Korea free-trade agreement - a highly provocative statement that the White House soon backed away from.

He pledged to repeal repressive 'security' laws, to develop reconciliation with North Korea and that his regime will adopt a more independent foreign policy from the US.

The New York Times warns that Trump needs to start talks with Kim Jung-Un, "before design or miscalculation leads to war".

However, a gung-ho editorial in the Wall Street Journal (owned by Rupert Murdoch) called for the deployment of nuclear weapons in South Korea and encouraged North Korean "elites to defect or stage an internal coup". It callously went on: "withholding food aid to bring down a government would normally be unethical, but North Korea is an exceptional case".

Armed conflict on the Korean peninsula would provoke huge anti-war and anti-imperialist protests across the world, even revolutionary movements - not least in the US against the already deeply unpopular Trump administration.

In the long run, however, the US will most likely have to face the prospect of entering negotiations with North Korea and reaching some sort of deal to try to 'contain' nuclear-armed North Korea.

Linked to this, is the struggle to fundamentally change society - run for people's needs not profits - by the working class across the Korean peninsula, the region, the US and the world. The unification of Korea on a genuine socialist basis, and the creation of a voluntary and equal socialist federation in the region, would see an end to class exploitation and wars.

Full-scale war broke out on 25 June 1950. Under the banner of the UN (including 60,000 British troops) the bombardment of the North caused two million civilian deaths and massive destruction of the country's infrastructure.

The war ended in 1953 with the border where it started, without a formal peace treaty and with the US refusing to recognise the 'Democratic People's Republic of Korea'.

Kim Jong-un is a hereditary leader of a regime notorious for its xenophobia, cult of personality and bogus 'Juche' (self-sufficiency) ideology.

Both formal and informal markets have grown, as well as private enterprise. The South Korean central bank stated last month that the North's economy grew in 2016 by 3.9%, the fastest pace in 17 years. Capitalists throughout East Asia are keen, of course, to exploit North Korea's cheap labour.

Only genuine workers' democratic control and management, at all levels of society in North Korea, could see the full potential of the planned economy realised. This entails overthrowing the despotic Kim Jong-un regime and linking up with the working class of South Korea in their struggle against capitalism and imperialism.