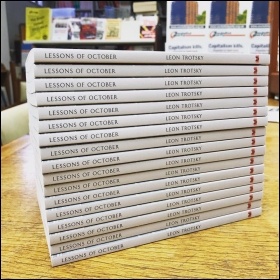 As the centenary of the Russian revolution approaches, this new publication is ideal reading. It is the first overview of how the revolution was won, written by one of the leading participants.

The new introduction, written by Socialist Party executive committee member Judy Beishon, outlines the historical context and the modern importance of the 1917 revolution, as Trotsky examines the build-up throughout the year, and crucial role that the Bolsheviks played.