Link to this page: https://www.socialistparty.org.uk/articles/26285 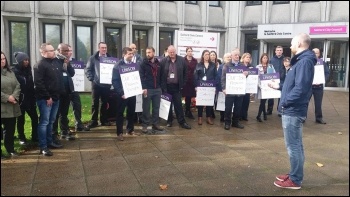 Within one week, Labour controlled Salford city council announced an increase in wages for some of the lowest paid care workers and also made a decision to cut the pay and some jobs of those working in Regulatory Services.

As part of its 'Transformation Programme' to digitalise the service, some workers will lose up to £6,521 a year through downbanding and 14 full-time equivalent posts are at risk.

A lobby (pictured above) was organised by Salford City Unison outside the council's cabinet meeting but the councillors approved the proposal.

Steve North, Unison branch secretary, said: "Union members are really disappointed with this decision. We have spent the last nine months explaining to Salford council why these cuts will impact not only on staff, but also on the delivery of services that are critical to keeping people safe in Salford.

"City mayor Paul Dennett is a Corbyn supporter and I don't think he will relish making this cut. Ultimately though good intentions don't pay bills or keep people safe."

This version of this article was first posted on the Socialist Party website on 11 October 2017 and may vary slightly from the version subsequently printed in The Socialist.