The class struggle and parliament: Dennis Skinner's ayes and nays 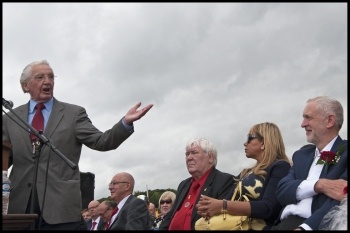 In addition to his celebrated political abrasiveness when baiting the Tories and their institutions, his love of nature, singing - he's a natural for a good karaoke - and his love of walking in the great parks is brought to life.

The film is at its most riveting when it portrays his unequivocal rejection of Toryism, capitalist hypocrisy and inequality, and his identification with workers in struggle.

Declaring in the Commons that he would be on miners' picket lines and donating his wages to the struggle. And implacably opposing the expulsion of Liverpool's socialist councillors.

Dennis used the parliamentary platform to expose to millions the crimes of capitalism and the virtues of socialist policies.

In one revealing clip he explains he never went on any all-party 'fact finding' foreign junket, saying the prospect of mixing socially with Tories and Liberals appalled him.

This seems like a man who never lost touch with his class. A miner who took the values of class solidarity into Westminster.

The film was mostly shot in 2014, before Jeremy Corbyn assumed his current authority. The absence of any reference to him gave the film an added strength.

Unlike many right-wing 'converts' to Corbynism, he maintained his radical statements even when the establishment considered it 'unpopular'.

However, without the checks and balances of party democracy - ripped up by former Labour leader Neil Kinnock and his acolytes - even some good class fighters can lose their socialist compass.

This is shown by a report in the Independent on 26 September 1998, headlined "Meet Tony Blair's newest new best friend: Dennis Skinner." It went on: "Tony Blair has found a new best friend.

"Dennis Skinner, the left-winger nicknamed the Beast of Bolsover, has become a surprising confidant of the prime minister.

"Downing Street has let it be known that Mr Blair would be delighted if Mr Skinner is, as expected, re-elected to Labour's ruling national executive committee this week.

"The MP for Bolsover, Derbyshire, a former miner, has become the unofficial link man between the prime minister and the so-called 'awkward squad' of left-wingers in the Commons.

"Mr Blair regularly telephones him for advice and invites him for tea in his parliamentary office. 'They get on very well,' a Downing Street source said. 'The prime minister has a very high opinion of Dennis - he's got a soft spot for him like we all do.

Subsequent events revealed to many on the left that any trust in Blair was a calamitous misjudgement.

Nevertheless, if Labour's 600,000 members are empowered to select parliamentary candidates of their choice, they could do worse than candidates who embrace the best of the values Dennis Skinner has defended for decades.

Discussions include: 'Labour and the trade unions'