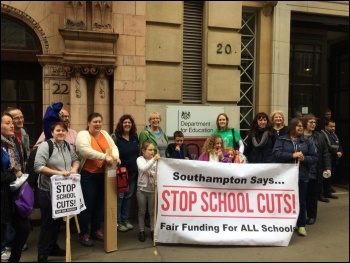 Over 1,000 teachers, staff, parents and students put the question to MPs on 24 October: "What are you going to do to end the school funding crisis?"

Schools are facing further cuts due to a change in the government funding formula. But what came across at the National Education Union (NEU) rally was the severity of the crisis right now - a combined attack on schools of underfunding, a squeeze on teachers' pay, draconian testing regimes, a narrow curriculum and privatisation through academies and free schools.

This financial squeeze means that schools are shedding staff, both teachers and teaching assistants, with growing class sizes and no-one to teach subjects such as music, IT and other core subjects. As older more 'expensive' teachers are pushed out or jump under the calamitous pressure of a huge workload and squeezed pay, schools are finding it hard to recruit and retain younger and less experienced staff.

To cheers, John McDonnell gave his and Jeremy Corbyn's commitment: "If Labour had won in June we would have ended school cuts and introduced free school meals. Restored education maintenance allowance for sixth form students. Lifted public sector pay for all. Scrapped tuition fees and restored grants. To provide education from the cradle to the grave, free at the point of need."

His speech was followed by a standing ovation from most sections of the hall. It was a glimpse of the mood of anger across the country and the potential for a fighting campaign linked to Corbyn's manifesto, in mobilising a mass campaign that could force an early general election.

Given the enthusiasm towards John McDonnell's speech, imagine the impact if he was to call on every Labour council to use its powers to fund schools using 'licensed budget deficits', which an incoming Labour government would reimburse. It would rally teachers and parents to build a mass movement to back Labour councils, with demonstrations and strike action to back their stand.

This was what was missing from the lobby. Rather than a launch pad for such an offensive, the opportunity to spell out what needs to be done was missed.

Such is the severity of the schools crisis, battles at a local level are inevitable. The left of the NEU and Unison, alongside other unions, must push a clear strategy forward to ensure these battles are not left isolated but are linked together in a country-wide movement alongside others entering the struggle against this weak, divided and hated Tory government.