Everybody knows it, but what a lie it was that austerity cuts wouldn't affect frontline services.

Our next-door neighbour was a long-distance driver and removal man. He's done heavy work all his life.

He's now retired and lives alone, but has friends and neighbours. And thank goodness he has.

He suffers from a range of medical conditions. Most pressingly, he struggles to breathe.

He can't walk anywhere anymore so he drives to the local shops. He eats his dinner every day at the café at the top of our street.

Periodically he is taken off to the local hospital in an ambulance because of his breathing. But more and more often, he is discharged in the night, into an empty house.

Gentrification means that the café at top of the street has closed down and will become a 'bistro'. So Geoff and his friend now drive a mile away to another café every day.

But then he had a prang in his car which has put him off driving. Now his friend is away for a couple of weeks.

He was discharged again a few days ago into a completely empty house - hardly able to walk from the kerb to his door, his breathing was so bad.

He's been assigned a social worker, but so far all she has been able to do is ring us, his next-door neighbours.

We have cleaned his kitchen and bathroom. We have shopped for him, and take milk in most days.

At least until his friend is back, we are taking him a dinner every day. We were going away one weekend - so had to get him stocked up with dinners before we went.

We don't mind. He's our neighbour. But he's embarrassed. A bit humiliated really.

It makes you so angry. He's worked all his life and this is what it has come to. 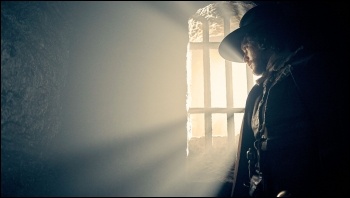 The 'Gunpowder' trilogy on BBC has drawn criticism for the violence and cruelty it portrays. This is understandable.

However, the tortures shown in such shocking detail are historically accurate. So was execution by hanging, drawing and quartering.

Any depiction of royalty which gives a romantic, fairy tale view of the splendour of the court - and ignores the methods by which the autocratic rule was maintained - is frankly dishonest.

In the second episode, chief conspirator Robert Catesby (Kit Harrington) witnesses the burning of two "heretics" in Spain - Jews in this case. This is a fair indication that the methods of autocracy did not vary much between England and Spain.

The persecution of Catholics in England was clearly depicted as a means by which the aristocracy, and in particular Lord Robert Cecil (Mark Gatiss), enriched themselves. Religion was used as a means of social control and a pretext for torture and murder.

The interchange between Father Henry Garnet (Peter Mullan) and Cecil in the final episode is particularly telling. Cecil accuses Garnet of causing the gunpowder plot.

Although he is not named by any conspirator and is depicted opposing the plot, his preaching is enough to hang him. Garnet responds by drawing attention to Cecil's role in causing the conflict. You cannot expect that people so persecuted will not respond in kind.

Anne Vaux (Liv Tyler) plays a strong woman in a period when society kept women firmly 'in their place'. I wouldn't dream of giving the plot away - no pun intended! - but for most of those involved it was unlikely to end well.

Although gruesome, this is a very good series and well worth watching.

Discussions include: what is the socialist approach to the state?