Link to this page: https://www.socialistparty.org.uk/articles/26456 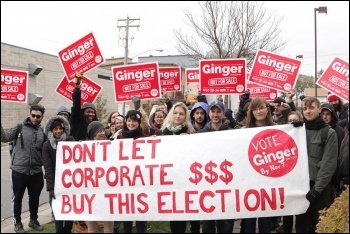 US: Historic vote for Ginger Jentzen campaign in Minneapolis

Ginger won more first preference votes than any other candidate. However, when the third and final round of the ranked choice voting (RCV) was done the following day, she had not made it to victory.

"The initial six point lead on election night was fitting for our powerful campaign which had defined the issues in this year's city elections from the start.

"We put a discussion about rent control back on the map and received widespread support from working people for our call to tax big developers and the rich to fund affordable housing, education and mass transit.

"We mounted one of the strongest ground games in an election campaign that Minneapolis has ever seen.

"... We won in every precinct except those in wealthy downtown Minneapolis. In working class neighbourhoods thousands of people were inspired by our bold demands and call for a political revolution in City Hall."

For more news and information on this impressive vote for socialist politics, click here for the article on the website of Socialist Alternative.