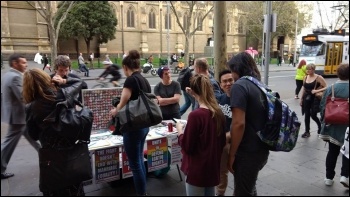 Thousands of people gathered around the country on 15 November to await the announcement of the Australian marriage law postal survey result.

There was a huge turnout with 79.5% of eligible participants returning their surveys. Of those, 61.6% voted 'yes', in favour of marriage equality. That is 7.8 million people in support of equal rights!

All eight states and territories returned a majority 'yes' vote. Even in former prime minister Tony Abbott's seat of Warringah, 75% voted 'yes'. Abbott - the former prime minister of the right-wing ruling Liberal party prior to Malcolm Turnbull - had been a leading opponent of same sex marriage equality.

This is a truly impressive result and a major setback to all those who stood in the way of this basic reform. The result also shows that the more conservative elements within the pro-equality campaign were mistaken to suggest that a public vote would unleash a 'festival of reaction'.

The opposite was true, with millions of people actively supporting the fight for LGBT+ rights, many for the first time. Undeniably it has been the politicians from both the major parties (Liberal and Labor) who have held back this reform.

While people did previously have questions about marriage rights for LGBT+ people, homophobic views have been steadily decreasing over the past 13 years.

In 2004 when John Howard (Liberal Party) changed the Marriage Act to specifically deny same sex marriage rights, over 60% supported that change. Since then that number has been flipped on its head. This shift in attitudes is in large part because of the tireless efforts of LGBT+ rights activists, both here and overseas.

This positive result will act as a huge boost to the LGBT+ rights movement and it represents a major step towards securing equal marriage rights, but the fight is far from over. The legislation currently supported by Malcolm Turnbull, Bill Shorten and the Greens (the Smith bill) is riddled with extra discriminatory clauses, supposedly to protect 'religious freedoms'.

The right wing of the Liberal Party has proposed an even worse bill that extends discrimination against LGBT+ people significantly. Neither of these bills should be accepted by the LGBT+ rights movement.

We need to keep up the fight to ensure we win marriage equality with no strings attached. We should also attempt to harness the positivity that has been created to take the fight beyond marriage equality and win equal rights for LGBT+ people across the board.

For socialists, equal rights is but the first step. We will continue to struggle until LGBT+ people win liberation and a world free from all oppression and discrimination.