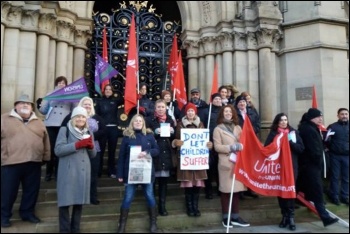 Demonstrators gathered ahead of Bradford council's monthly meeting to protest proposals in the consultation of an 'early help service', part of the children's services directorate of the council.

The plans propose a £13 million cut mostly by making up to 480 staff redundant. The council also wants to downgrade children's centres across the district, currently used by 22,000 young children, 60% of all under-fives.

Trade unionists in the council, users of the service and their supporters distributed leaflets produced by the local Unite the Union branch.

David Ward, former Liberal Democrat MP and now an independent councillor spoke to demonstrators opposing the proposals and mentioned the Green Party group on the council was challenging the proposals too.

Unfortunately, the response from the local Labour leadership is to double down on pushing these cutbacks through. Val Slater, the executive member covering the service, told the local press: "Naturally people have a right to protest but until government starts to address our major concerns regarding funding for children's social care, then we have to manage with the limited funding we have." As if the government is going to change its position without huge pressure being exerted on them to do so.

If Labour councillors want to follow through on Jeremy Corbyn's anti-austerity policies then they ought to be leading the fight to force the money out of the government to fund vital local services, such as this or the library service, which faces a further near £1 million worth of cuts in the forthcoming budget proposals.

Anything less than doing so is a dereliction of duty for those who want to fight the cuts. It should include putting forward a no-cuts budget for 2018-19.

In the meantime, campaigners are planning for a second, larger demonstration to take place outside the council budget setting meeting in February. Socialist Party members will be arguing that this should be opened out to all those fighting against the various raft of cuts being made by the council.