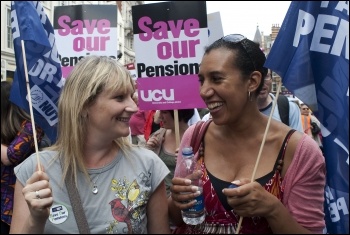 Save our pensions, photo Paul Mattsson   (Click to enlarge)

88% of University and College Union (UCU) members in 68 universities have voted for national strikes on a 58% turnout.

Universities UK is proposing to scrap the 'defined benefit' element of our pensions. This will reduce the value of staff pensions by 50% or more, and leave an average lecturer £200,000 worse off in retirement.

This is the highest turnout for a national ballot in the history of UCU, showing the anger at the scale of the attack. Many branches worked hard to build this, giving us a strong mandate for action.

At the time of writing there are further negotiations scheduled, beginning on 23 January.

But if there is no change in the employer's plans, UCU has announced a sustained, escalating programme of 14 days of strike action. This will begin with a two-day stoppage on or around 22 February, alongside action short of strike like working to contract.

61 of the universities balloted secured turnouts above 50%. The seven other institutions which voted for action but didn't secure the threshold required by the latest anti-union law will now be quickly re-balloted in light of the national result.

On all affected campuses, and on those not affected, meetings of workers and students must be held to begin to build solidarity for the strikes. This attack on our pensions is part of the marketisation and privatisation strategy of the Tory government. Unite to defend pensions and education!