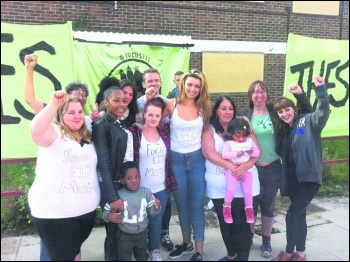 Hated Newham mayor Robin Wales, the Labour right-winger who's held onto power for 23 years, is finally facing an open election.

20 wards voted overwhelmingly against automatic reselection of Wales as Labour's mayoral candidate for the east London borough. In West Ham Constituency Labour Party, he was able to muster no more than one vote in all wards but one - where he got two votes.

Newham is one of the poorest boroughs in London and has been one of the hardest hit by austerity, directed by the Tories and implemented by the all-Labour council Wales leads.

Meanwhile, Sir Robin has overseen massive wastage - such as £52 million of the borough's funds sunk on the London Stadium it no longer owns - while claiming cutbacks are necessary.

His term as a Tory-lite executive mayor has also been marred by accusations of suppression of democracy. Members threatened legal action when a 'trigger ballot' held last year automatically reselected him.

He won through the votes of local branches of some affiliated unions and societies - many of which give the appearance of being empty bodies, casting their votes without democratic involvement.

Labour Party members in Newham challenged the result, citing procedural "irregularities and inconsistencies." To avoid the scandal of a legal battle, Labour's national executive committee ruled the trigger ballot would be re-run.

Councillor Rokhsana Fiaz, a charity director who describes herself as a "democratic socialist" and has been involved in Newham Against Austerity, plans to challenge Wales.

It's good that left-leaning councillors see the need to organise against the Labour right. The Socialist Party, for example, has long argued for this. But it needs to go further than just winning elected positions.

It's vital that an anti-austerity mayor - if this is what Cllr Fiaz hopes to be - uses council reserves and borrowing powers to end the cuts now. By mobilising the local workforce and community, they can fight for more funding from central government.

We know the money is there. The recent PFI scandals show how much the Tories have forked out to big business privatising public services. An anti-cuts mayor could lead the fight to win it back.