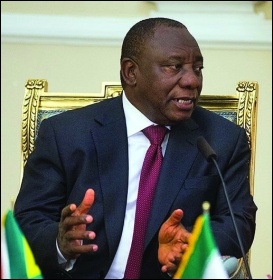 Inside two months following his election as ANC (African National Congress) president at the party's December 2017 national conference, Cyril Ramaphosa has realised his ambition to become the country's president.

If his victory in the ANC presidential succession race was not at all certain, the narrow margin of his victory made Jacob Zuma's dramatic resignation so soon after the conference seem improbable.

Ramaphosa's ascendancy to the highest office in the land was built on a 50-50 split that ran right through its top structures.

Even more unpromisingly for Ramaphosa, his triumph was the result of the betrayal of Mpumalanga Premier David Mabuza, the most powerful member of the pro-Zuma so-called 'Premier League'.

By instructing his delegates, in the name of "unity", to switch their votes from Zuma's anointed successor, his ex-wife, Nkosazana Dlamini-Zuma, it could be reasonably expected that Ramaphosa would be beholden to the most corrupt of the trio.

By the evening of 14 February, the reality of the decisive shift in the balance of forces in the ANC that set in after Ramaphosa's conference victory, finally dawned on Zuma.

For the second time in ten years, the ANC has humiliated its president by not permitting him to complete his term of office.

The drama of Zuma's ousting is rich with irony. He became the victim of the same process he had led to prevent Thabo Mbeki from completing his term nine years ago - a recall.

So discredited had Zuma and his cronies become that the demand that Zuma step down was supported by virtually every layer of society including big business.

It is this factor, the tsunami of public of opinion, that overwhelmed the ANC. Zuma's erstwhile allies dumped him like rats leaving a sinking ship.

Zuma's regime was born in scandal and morphed into a kleptocracy. He converted government into a criminal enterprise for the self-enrichment of his family and cronies.

It is estimated that the looting spree has resulted in the loss of over R100 billion (£6.13 billion) to the public purse. Under his watch the economy has nosedived, gasping for breath.

55% of the population live in poverty, with 9 million unemployed and 15 million going to bed hungry every night. The economy has experienced two recessions and a rating agency downgrade.

Under Zuma the ANC has undergone two splits - the birth of the Congress of the People in 2008 and the Economic Freedom Fighters in 2012.

The Tripartite Alliance (the ANC, Communist Party and Cosatu union federation) has lost all credibility.

Cosatu expelled the 340,000-strong National Union of Metal Workers following its 2013 decision not to support the ANC in the 2014 elections.

Nothing expresses the political bankruptcy of Cosatu and the Communist Party than the fact that they cling on for dear life to the Tripartite Alliance having campaigned for the billionaire Ramaphosa - one of the richest men in the country and 'butcher' of the Marikana mineworkers.

Understandably, Ramaphosa's victory has been welcomed by most people, including the working class. They hope he will make good on his promise to root out corruption, lift the economy out of the doldrums, create jobs, eradicate poverty and raise living standards.

Since Ramaphosa's election as ANC president the priority crimes unit (the 'Hawks') and police appear to have been energised, leading to raids on the Gupta compound, the offices of the Free State Premier and the arrest of a number of corruption suspects.

The state electricity utility Eskom's entire board has been replaced. The National Prosecuting Authority is under pressure to reinstate the corruption charges against Zuma.

These developments have given the impression that Ramaphosa means business. He thus comes to power carrying the hopes of all sections of society.

But herein lies the contradiction. The expectations of the capitalist class and the working class are irreconcilable.

Ramaphosa is the candidate of big business. His entire career has constituted preparation for the role the capitalist ruling class has thrust on him and he has enthusiastically placed himself at their disposal.

He forged close ties with big business in the 1980s in the Urban Foundation, established to create the basis for the development of a black capitalist class as the strategists of capital became increasingly alarmed by the socialist consciousness that had developed especially in Cosatu.

Embittered at being overlooked for the position of deputy to Nelson Mandela in the first post-apartheid government, he left politics and got on with the business of becoming a billionaire.

He comes to power when rating agencies are demanding savage austerity measures to avoid a further downgrade.

Given the state of the world economy, and lack of demand in the domestic economy because of the levels of poverty, there is in fact little incentive for capitalism to invest at home and no way out on the world market.

Ramaphosa's spring will therefore be short-lived. For this reason it is not excluded that Ramaphosa may call an early election.

The birth of the new South African Federation of Trade Unions (Saftu) in 2017 represented the first steps towards the working class reclaiming its political and class independence.

The Saftu leadership has the opportunity to put an end to this undue delay. It must set a date for the launch a mass workers party on a socialist programme that will unite community, student and workplace struggles.