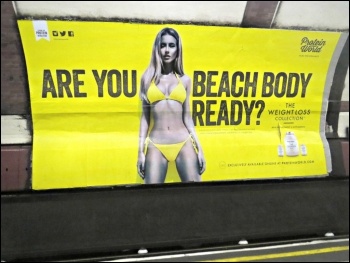 These ads on London Underground were taken down and banned after 60,000 people signed a protest petition online, photo Graham C99/CC   (Click to enlarge)

Many will have been shocked by recent NHS figures showing the doubling over the last six years of hospitalisations due to life-threatening eating disorders.

In 2017-18, the health service made 13,885 hospital admissions with either a primary or secondary diagnosis of eating disorders - up from 7,260 in 2010-11. Beat, an eating disorder charity, reported an increase from 7,000 calls to their helpline last financial year to an expected 17,000 by the end of this March.

OSFED disorders are the most common, and anorexia the least common. Yet even anorexia admissions have doubled in the last six years for under-19s.

One psychiatrist told the Guardian that "outpatient eating disorder service remains a postcode lottery." This is a reflection of the cutbacks and privatisation of services.

The Guardian also reported on one woman and daughter who had to leave their jobs and relocate from Norfolk to Gloucestershire to access outpatient services!

Eating disorders are complex and don't have simple causes. But in general young women are the most affected - a reflection of the intense objectification of women's bodies in particular.

Many commentators point to the development of social media and widespread sharing of personal photos as one factor fuelling the recent increases. But this takes place in the general context of misogyny and alienation under capitalism.

And another factor, less talked about in the press, is the issue of growing dependence on processed foods.

These often include excessive amounts of salt, sugar and fat, completely out of kilter with what is necessary to maintain a healthy weight. Such foods are readily available, cheaply, in large quantities - people don't usually binge-eat on home-cooked foods!

But it is precisely the lack of time for most people to eat well-prepared, nutritious meals - whether cooked at home or in affordable restaurants and canteens - that has fuelled the growth of snacking. Often this is due to insufficient breaks at work, long hours and commutes to make enough to live.

Combined with a more sedentary lifestyle in the deindustrialised economies, this has contributed to a trend towards obesity.

The rise in eating disorder admissions, and cuts to the NHS, all highlight one thing. So long as capitalism continues to have a workforce to make sufficient profits from, our health and that of our families is of little importance or priority.

Socialists must fight for an end to cuts and sell-offs and the full funding of eating disorder services, particularly outpatient services, in every part of the country, alongside other vital NHS services.

But beyond that, we struggle for a world where people have the time and facilities to live a healthy lifestyle, in an environment and culture geared to support everyone fulfilling their potential - rather than trying to shape them into cogs of the capitalist machine.

A socialist society would lay the basis for dealing with the problems at the root of eating disorders.