Link to this page: https://www.socialistparty.org.uk/articles/27009

We feel that we will win - a Merseyrail striker speaks 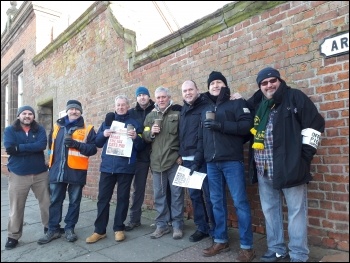 3 March was our sixteenth day of strike action in a year-long dispute over the introduction of driver-only operated trains on the Merseyrail network.

Even in the bitter cold the picket lines remained solid and resilient in the knowledge that we can win this dispute over keeping a second safety-critical person on every train from start to end of service, which the vast majority of the travelling public of Merseyside want.

Drivers in the Aslef union have shown solidarity with us (even though they aren't in official dispute) by not crossing any Merseyrail RMT picket lines and I honestly thank each and every one of them from the bottom of my heart. The feeling from RMT guards at Merseyrail is that we will win with the continued support from the Aslef drivers and from the Merseyside public.

The facts are, this particular dispute could easily be resolved tomorrow if the Liverpool regional transport committee's (the vast majority of which are Labour councillors) decision was reversed under the instructions of metro mayor Steve Rotheram and Liverpool city mayor Joe Anderson, who are both elected Labour mayors. Unfortunately Rotheram and Anderson have decided not to intervene in the RMT's campaign to keep the guard on the trains, the latter saying he thought the strike action was "unreasonable".

Rotheram and Anderson are the main reasons why this strike has gone on for a year, because they are complicit to sit back and watch, instead of listening and acting on what 89% of the travelling public on Merseyside want - to keep the guards on the train.

Jeremy Corbyn recently commented on Twitter that he fully supported the retention of guards on trains, yet Rotheram and Anderson choose to ignore their own party leader. It's clear to all that Labour is two parties in one. This dispute ultimately shows that.

I just hope that come the local elections in May, people can see that most Labour councillors in Merseyside are fanatical supporters of Tory cuts.

This version of this article was first posted on the Socialist Party website on 8 March 2018 and may vary slightly from the version subsequently printed in The Socialist.