Link to this page: https://www.socialistparty.org.uk/articles/27032 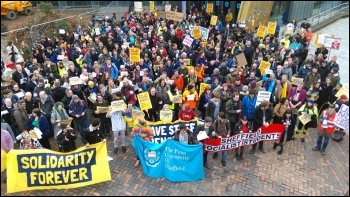 Sheffield university UCU and students vote no to the deal and to keep the strike going, 13.3.18, photo Alistair Tice   (Click to enlarge)

With a storm of protest on social media overnight and remarkable scenes on angry picket lines and massive protests, University and College Union (UCU) members around the country have ensured no backtracking in their struggle to defend their pensions.

UCU members were enraged at a proposed agreement reached at conciliation service Acas and the joint statement from Universities UK and UCU released on 12 March.

The deal, which was a significant concession on UUK's previous decision, was still a massive cut to the value of our pensions. Strike action has forced concessions, but this was not the deal members have been striking for.

Even worse, the joint statement - issued the night before branches were consulted - suggested we will call off strikes and action short-of-strike, and that members will reschedule teaching.

That was an insult to the fantastic struggle our members have waged - we cannot demobilise the strike now when all the momentum is on our side and pickets have remained so strong.

There is no point in an interim deal which is just used as a stepping stone to Collective Defined Contribution pensions, as the joint statement suggested.

But now (in the afternoon of 13 March), all but two of the 64 branches on strike have organised emergency meetings and voted to reject the deal, and so has the UCU higher education committee which has met today.

The big, angry and lively protests around the country pressured the national leadership to rethink. It is clear UCU members are not willing to cease their action for a shoddy deal and nor should they. We have made history, waging an incredible struggle despite the Trade Union Act, and we are the first union to do so. Keep up the strikes, keep up the action!

The above report was updated during the course of the day on Tuesday 13 March. 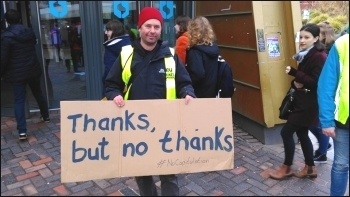 Keishia Taylor, UCU striker and UCL PhD student,
reported from the lobby of the UCU reps' meeting in London early on 13 March:

After publishing a UCU/UUK joint statement about their 'agreement' without talking to UCU members, UCU general secretary Sally Hunt had the audacity to talk to the angry crowd about democracy. But this is the opposite - members were not consulted, it is not our agreement and we want to reject this insulting deal.

Hundreds of university workers and students have mobilised in only 12 hours to protest outside the UCU talks and say no to the deal and Sally Hunt's version of democracy. Around the country, emergency meetings on picket lines are unanimously voting against this offer and for continuing our strike action.

So far, the dispute has united our universities and shown us the power of standing together. With university workers making huge sacrifices and incredible solidarity from students, we've forced the bosses to retreat and the latest offer retains some Defined Benefits.

Huge numbers have flooded into the union, particularly younger people and those who have never been on strike before. The significance of how much we have achieved so far should not be underestimated!

Regardless of the outcome, there is a victory in forcing the bosses back and more importantly, proving to workers we can unite and fight. United we are strong and we are ready to strike until we win. 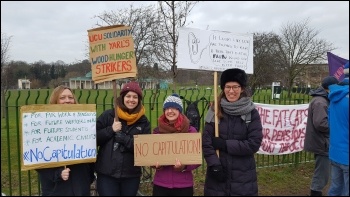 UCU members at University of Nottingham, photo by Gary Freeman   (Click to enlarge)

Below is the text of a leaflet by Socialist Party members in the UCU given out on the morning of 13 March:

UCU strike forces concession from employers - But not enough!

Leicester UCU members in Leicester voting to reject the deal. No votes to accept it at the mass meeting. 13.3.18, photo by Steve Score   (Click to enlarge)

The employers offering to take their initial proposal off the table for three years is a significant climb-down and is as a direct result of the strike action.

But before we decide if it is enough to call off the action we need the full details as to what it exactly means for members.

NO agreement without members' say so 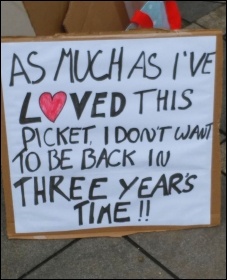 Given that there was a planned national representatives meeting taking place today, why did our leadership issue a joint statement with employers effectively supporting the proposals before any discussion with the members? Why have we been issued with an instruction to re-timetable lectures?
This was a mistake and it risks demobilising members and losing the momentum we have built up with the strike so far.

There is talk that the leadership will put the offer to an online vote. This must be rejected and instead there must be local meetings where the offer can be fully debated and voted on.

Whilst UCU members might agree to an independent review as long as the union has equal oversight, this should be done with no pre-set conditions or outcome.

Unfortunately, the employers are proposing in advance of the review that we must end up having to accept the CDC scheme; this is not acceptable. 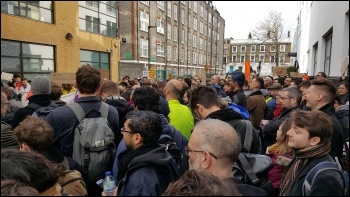 How much will the increase in contribution rate by 0.7% cost us?

Before deciding why and if any concession should be given to the employer, members have a right to know how much it will cost them.

We need the employer to give a breakdown on each pay point of how much more they would have to pay. Given that members have had little or no pay rises for years, any further pay cut will hit members hard. 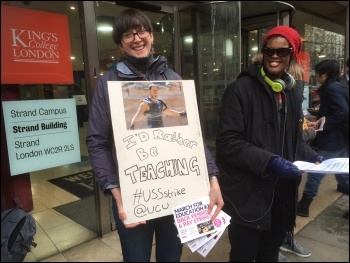 What will the change in accrual really mean in lost pension?

Part of the proposed "transitional offer" is to reduce the accrual rate to 1/85th, what does that mean in real money for members; how much pension will members lose with this change on each pay point? We need this information before we can decide that any proposal is acceptable.

This offer should be rejected. UUK are raising the issue of the deficit but we should demand that the government underwrites the scheme.

The planned strike action should be continued and escalated - linking up with fellow university unions and students and our UCU members in FE who are taking action on pay.

This version of this article was first posted on the Socialist Party website on 13 March 2018 and may vary slightly from the version subsequently printed in The Socialist.