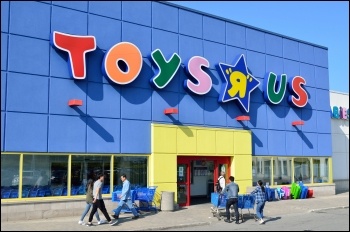 Almost every week it seems another retail chain is closing stores. 21,000 retail jobs have gone in the first three months of the year according to the Press Association.

Toys R Us went into liquidation at the end of February, with electronics store Maplin going into administration just hours later. In March, Italian restaurant Prezzo announced it was closing a third of its locations. Fashion retailer New Look has announced closures of 60 locations, just over a tenth of its stores.

The growth of online shopping is a factor, with 77% of people buying at least one item online in 2017 according to the Office for National Statistics (ONS). But only around 18% of sales in 2018 are expected to come via the internet, so 'bricks and mortar' stores still remain dominant.

New Look's recovery plan also includes rent reductions and new lease terms on a further 393 locations, the vast majority of its shops. This is a result of high commercial rental prices, much like those in the private housing sector.

Around a decade ago, companies such as Boots, Tesco and others sold their properties to asset management companies who leased stores back to them, many of them on 'upwards-only' rent review terms.

This has led to an overheating of the retail property market, especially in central London, combined with companies increasingly stuck with large, warehouse-type shops rented in better times.

This is compounded by the delayed revaluation of business rates charged by councils, based on rental prices. So those stores paying over the odds in rent continue to do the same with rates even after renegotiating.

The result is the widespread closures we are seeing now, with whole town centres beginning to look like ghost towns. In towns like Burslem in Stoke-on-Trent, Dewbsury in West Yorkshire, and Newport in South Wales, around 30% of shop front retail space is vacant, according to the Local Data Company.

But underlying all of this is that people simply don't have the money to spend! This is the result of year-on-year pay freezes for many workers, or below-inflation pay 'increases' if we're very lucky.

Overall consumer spending went down last year for the first time in five years, according to Visa. Retail specifically increased, but growth slowed to just 1.9%, the lowest since 2013 says the ONS.

A very poor Christmas saw retail sales fall 1.4% in December compared to November, and then only 'recover' by a pitiful 1.6% in January compared to 1.5% in 2017.

A recovery in the retail sector requires a recovery in the pockets of ordinary workers. Unless the trade union movement leads a fightback on pay, expect the squeeze to continue. And only democratic public ownership and socialist planning can guarantee workers safety from market forces.