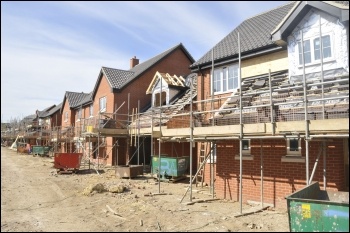 Grenfell Tower stands as a terrible monument to a totally failed model of providing housing. The fire was the result not just of Tory austerity, but of decades of cuts, privatisation, deregulation, relaxation of planning, and lack of democratic accountability.

The treatment of the survivors and community since is further proof, if it were needed, that council services run on the private business austerity model fails people's most basic needs.

The housing crisis is everywhere, but it is at its sharpest in London. 'Social cleansing', 'gentrification', 'the London clearances' - call it what you will, 100,000 households have been forced out by high rents, impossible house prices, and the regeneration policies of councils.

New buildings go up but only the highest paid and millionaire speculators can buy them - and leave them empty to keep the value high.

In fact 5% of all homes in London are empty. Meanwhile the number of street homeless has tripled.

Regeneration of council or housing association homes means working class people's homes are taken over by greedy property developers and replaced by luxury accommodation, with the original tenants having little right of return.

It entails high-density development - great looming tower blocks of expensive flats, with only a small proportion "affordable". The loss of public space includes grass and trees, libraries and youth centres.

Labour councils see the Tories' plan to end the central government grant in 2020. Councils will then be self-funded from council tax, business rates and other income.

Rather than put up a fight, they seek to maximise their income from selling land and property, and enticing well-off residents.

Jeremy Corbyn shook up the debate on housing when he declared that there must be an end to this social cleansing.

He said there should be residents' votes on any regeneration schemes, and that, where it took place, all existing tenants should be guaranteed homes on the same terms as before. He said empty homes should be requisitioned to house the homeless.

Jeremy Corbyn should instruct Labour councils to immediately stop all projects that involve social cleansing, and carry out ballots on any regeneration projects.

London's Labour councils have enough reserves to build 80,000 council houses now. They should do that, on lifetime tenancies and social rents. They should take over empty properties for council housing.

They could register private landlords, in order to ensure decent standards, and tackle overcrowding. They should bring in rent controls that cap the level of private rents, establishing democratic rent tribunals.

The issue of fire safety applies everywhere there are blocks - not just on the crucial issue of removing cladding, which still remains, but also retrofitting sprinklers and other fire safety measures such as effective fire doors.

It is an outrage that the Tories are refusing funds, but Labour councils shouldn't wait. They should carry out fire safety checks and make the results public, do the work and send the bill to central government.

Councils could ensure decent pay, conditions, and safety for all housing and construction workers, including stopping the use of blacklisting firms and enforcing collective agreements.

Councils could begin to transform the situation - if they have the will to stand and fight. 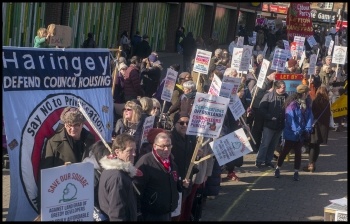 The campaign to defeat the proposed 'monster block' in Walthamstow, east London, is a clear example that the Labour Party is indeed - as the Socialist Party has described it - two parties in one.

On the one side you have the people who oppose this development. Stall holders in the market, shop keepers, parents of children who use the children's playground, and the people who love the trees.

Alongside Labour Party members - virtually every Labour Party ward has passed a motion of opposition and now so has the general management committee of the local Labour Party.

On the other side you have the right-wing Blairite councillors. And that's about it. It's hard to find anyone who actually supports these plans.

The line has been drawn. Quite literally, a group of artists chalked out the land we are set to lose to illustrate the land grab.

And why such a swell of opposition to these plans? There is the loss of land and space and skyline. But the biggest objection by far is the lack of affordability of the 500 units which will be built.

With 47% of the borough being classified as earning on or below the London Living Wage, and with two bedroom flats in this new development expected to start at £350,000, it's clear to everyone that these homes are not for us. The scheme epitomises social cleansing.

The campaign has used every tool in the box to try and stop this development. The council received nearly a thousand letters of objection prior to the planning meeting.

500 people turned up to lobby the planning committee. 150 people came a to Save Our Square public meeting.

600 rallied in the square. Hundreds wrote to Sadiq Khan, London's Blairite mayor, urging him to block these plans.

After exhausting every avenue it's become obvious that the Blairite politicians in London are not going to help us stop this development.

Not the councillors, not the mayor and not the Blairite MP, Stella Creasy, who has refused to openly oppose the plans.

Failure to deselect these Blairites leaves people asking, 'how should we vote at the 3 May local elections to stop these plans?' The newly elected council will be asked to rubber stamp these plans. So how the public votes will definitely have an impact.

So far all the Blairite politicians have shown to everyone involved in the campaign, and those watching it unfold, that they do not oppose this scheme.

The Trade Unionist and Socialist Coalition (TUSC) is standing 18 candidates across the borough on an anti-austerity and pro-Corbyn platform.

We're standing two candidates in High Street ward, where this development is planned. Claire Coghill, leader of the council, is a sitting councillor in this ward - the monster block is her baby.

TUSC is not standing against Corbynistas, or those Labour candidates who have publicly pledged their opposition to the blocks.

We are arguing that as the Blairite councillors have not been replaced from within the Labour Party, the working class is left with no alternative but to deselect them from without.

We are urging people to stop these plans and usher in an anti-austerity fightback in Waltham Forest.

Corbyn council will be put to the test

Haringey looks set to be the first Corbynite council after the May local elections. This is eagerly anticipated and Haringey may be featured heavily in the media in the run-up to election day itself.

This will be a real test for those who are hoping that it could represent a turning point. Services have been slashed and workers sacked over a period of years.

However, when the hated Haringey Development Vehicle (HDV) 'regeneration' and privatisation scheme was recently delivered a series of near-fatal blows, confidence grew that change was possible.

Claire Kober, the Blairite council leader, was the main driver of this vicious piece of social cleansing. Her unpopular policy has forced her to not stand for re-election.

Many old pro-HDV Labour candidates have been deselected, which could pave the way for a left council, and this presents great opportunities to implement a no-cuts budget.

However, some Blairites remain and it is important that they are not given one inch.

In the Seven Sisters ward where Kober was a councillor, three right-wing pro-HDV councillors are standing for Labour.

This is why the Trade Unionist and Socialist Coalition (TUSC) has taken the decision to stand a team of candidates in that ward.

TUSC in Haringey believes that it will be the only political force in the Seven Sisters ward to fight on the policies that Jeremy Corbyn represents.

We are campaigning alongside those in the Labour Party who are fighting against the ghost of Blair.

We will set out a clear socialist programme and use the elections to explain how we can defeat austerity in Haringey and make no cuts whatsoever.