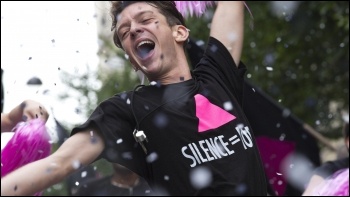 "This is how you fight Aids!" Although it's chanted with scorn as LGBT+ activists are dragged away by the police in an early scene, this line perfectly describes the struggle of 'Act Up' (Aids Coalition To Unleash Power).

120 BPM follows the Paris chapter of Act Up during the 1990s, and the blossoming relationship between two members. The dramatic fightback against political indifference and profiteering by pharmaceutical companies is based on director Robin Campillo's personal experience as an activist with the organisation.

Act Up was initially formed in 1987 in New York, but spread across the world to help organise militant political action against the ongoing Aids crisis.

It had become one of the biggest health crises of modern times - yet faced disinterest at best from those with the power to direct work to end the disease.

120 BPM brilliantly and unashamedly shows us Act Up's fight. It opens with members invading the stage of a government talk on the Aids crisis in protest against them failing to provide information on HIV/Aids prevention.

There are occupations of drugs companies who aren't willing to provide enough of the life-saving medication needed to meet demand - in order to maximise their profits.

Activists teach themselves about medication and biology before walking into schools to provide condoms and information to teens.

The drama also focusses on the vital importance of organisation. In scenes that will be familiar to any activist, much of the film takes place in weekly meetings where members debate strategy, tactics, chants and even the wording of leaflets.

This is a wonderful and vital depiction of an incredibly inspiring part of the fight of LGBT+ rights. Even funerals of deceased members become protests to continue the fight.

120 BPM shows us Act Up's tremendous influence on the Aids crisis. Undoubtedly, the successes we have gained in understanding and treatment of HIV/Aids would not have occurred when they did without Act Up.

But this should also serve as motivation to continue the fight for decent health services and liberation for all.