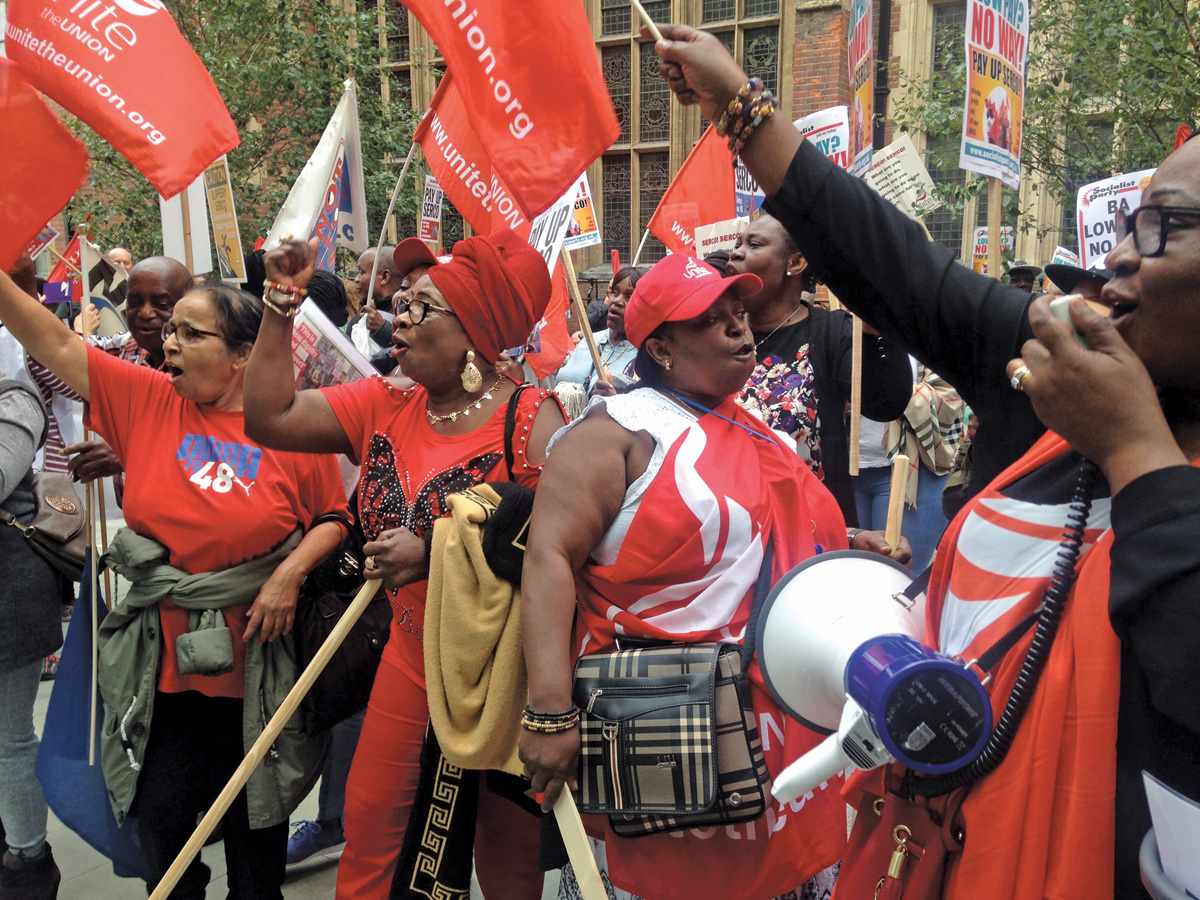 The “hostile environment” that Theresa May promised to create as home secretary with the Immigration Act 2014, and the policy and guidance that have spewed from the Home Office under the Tories and Blairites, were always going to lead to increased oppression for black and Asian workers.

The government’s 2017 Race Disparity Audit showed the effects of racism in housing, education and employment. Without even looking at the effects of the establishment’s racist immigration policies, it is clear that non-white people get an especially raw deal when it comes to opportunity in Britain.

These are symptoms of capitalism – from the lasting effects of historic slavery and colonialism, through to the bosses’ drive to maximise profits by playing workers off against each other. The profit system wants workers competing in a constant ‘race to the bottom’ in wages and conditions.

June marks the 70th anniversary of the Empire Windrush passenger ship first docking in Britain. The British government encouraged workers and their families from its current and former colonies to come here to fill gaps in the workforce after the devastation of World War Two.

These workers went on to become pillars of public services like the NHS and public transport. But now many of the ‘Windrush Generation’ find themselves denied access to the NHS, sacked from jobs they’ve held for a lifetime, detained for undefined periods, and some even deported. It is more than shocking.

Current home secretary Amber Rudd’s admission that she was unaware her own department had deported any migrants is testament to the contempt the capitalist establishment has for workers. Public outrage has pressured Rudd and May into stating they will guarantee citizenship rights without fees or tests to the Windrush generation.

These are rights their own governments were responsible for undermining in the first place. The citizenship process should not have to take place at all.

Labour MP Emily Thornberry has rightly called on Rudd to quit, and her colleague Dawn Butler has correctly accused Theresa May of racism. David Lammy MP has also spoken out against the government.

But what are they going to do about it?

Rudd will resist quitting because it would weaken an already weak and divided minority government. And fundamentally the Tory party defends capitalism, a system which is intrinsically unequal and racist. Fighting racism includes fighting to get them out.

Jeremy Corbyn has rightly called for an end to the “hostile environment” and will be marching on the Trade Union Congress (TUC) national demonstration on 12 May. He and the TUC could make that the launch of a serious mass campaign.

Coordinated strike action should be the next step – to force the Tories to call a general election and get them out. This needs to be linked to building proper democratic structures in Labour and getting rid of the Blairites.

The Blairites’ record is one of support not just for pro-capitalist policies in general, but racist policies in particular (see below). While using false allegations of fostering antisemitism to undermine Corbyn’s anti-austerity leadership, they supported the creation of the “hostile environment” which caused the Windrush debacle!

The Socialist Party fights for decent jobs, homes and services with full rights for all, no matter where you are from. We campaign for the right to asylum, the right to organise, and the right to work and benefits.

It is the capitalists and their politicians who are behind cuts to pay and services, not migrant workers. By organising together, in trade unions and political struggle, we can stop the race to the bottom and take the wealth off the super-rich who benefit from it.

We all know the Tory party is a racist party with a long history of bigoted attacks. But what is the recent record of the Labour right?

‘New Labour’ under Tony Blair introduced a series of laws progressively restricting the right for those fleeing repression and war to claim asylum. It also introduced a racist points-based immigration system for non-EU workers.

And the Blairites backed Theresa May’s “hostile environment” measures. In fact, Blairite Alan Johnson was the first to use the phrase back in 2010 when he was home secretary in Brown’s government!

In 2013, Shadow Home Secretary Yvette Cooper spoke in favour of the Tory bill which became the “hostile environment” Immigration Act. She said “we will not oppose the bill” because “some of its measures are sensible” – but that “it claims to tackle illegal immigration, but does nothing of the sort.”

After that, the Blairites went on to lead Labour’s Remain campaign in the EU referendum, ‘Labour In for Britain’. They fought to stay in the neoliberal bloc on the basis of fearmongering about increased immigration after Brexit.

Alan Johnson, the campaign’s chair, said “remaining part of the single market helps us to control… immigration” and “if we leave, the situation is going to be worse.” The EU is also responsible for leaving desperate refugees to drown in the Mediterranean, and ruining impoverished African farmers with its ‘Common Agricultural Policy’.

After the abolition of slavery – at least in law – in the 19th century, most people throughout the British Empire were simply ‘British subjects’. Growing national liberation movements, and the need to repopulate British industry after World War Two, changed that.

In 1948, the Labour government legislated that anyone with a close relationship with Britain or one of its remaining colonies – like Jamaica, Nigeria, and the ‘Trucial Coast’ which became the United Arab Emirates – became a British citizen.

Nationals of self-governing British ‘Dominions’ – like Canada, India and South Africa – had both their own national citizenship and Commonwealth citizenship. This was separate to British citizenship, but meant no restrictions on living in Britain, and the right to register as British citizens after a year here.

As the British Empire continued to collapse and all the large colonies won independence, the British state revoked British citizenship for whole swathes of newly ‘foreign’ nationals, including many already living and working in Britain. Some groups became Commonwealth citizens if their countries of origin joined the Commonwealth.

In 1971 the Tories denied both British and Commonwealth citizens the automatic right to live in Britain unless they could prove direct connection to it. In 1981 a new Tory law moved British citizens from the remaining small colonies – like Bermuda, the Falklands/Malvinas, and Gibraltar – into a separate class of citizenship, subsequently recombined in 2002.

The long and complicated history of citizenship statuses means that many people do not have documentation which ‘proves’ they are citizens. The Immigration Act 2014 put additional burdens on workers to prove their right to stay in Britain.

In the case of the Windrush Generation, the destruction of their ‘boarding cards’ is a big exacerbating factor. It seems the Home Office eliminated a major source of evidence for immigration status… and then went on to demand workers provide it.