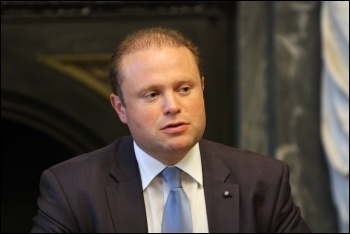 The prime minister of Malta has tried to use International Workers' Day to attack a murdered anti-corruption journalist.

Allegations against the family and political staff of Joseph Muscat, leader of Malta's Labour Party, emerged from information in the Panama Papers offshore accounts leak. Malta is itself a tax haven with an effective corporate tax rate of 0 to 5%. Claims centre on the sale of Maltese passports.

Investigative journalist Daphne Caruana Galizia was central to exposing the alleged dodgy connections of politicians from both Labour and the traditional right-wing Nationalist Party.

Caruana Galizia slammed the Maltese establishment as running a "mafia state." She died in October in the explosion from a bomb wired to her car.

On top of corruption allegations, Muscat has presided over privatisation of several hospitals, the state energy company, and Air Malta. His response to growing international media pressure following Caruana Galizia's death was "the best reply we can give is on May 1" when workers celebrate International Workers' Day.

May Day is a demonstration of international workers' solidarity. To associate it with the murder of a journalist killed after criticising pro-big business politicians is a disgrace.