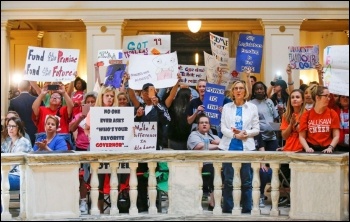 Militant strikes and mass demonstrations of tens of thousands of teachers, students and community supporters have spread like wildfire across West Virginia, Kentucky, Arizona and Oklahoma since the end of February.

Other teacher actions, demonstrations, and one-day strikes have taken place in New Jersey and Puerto Rico. Recently the threat of walkouts spread to Colorado state.

The movement started with a nine-day strike by 20,000 teachers across West Virginia at the end of February. The outcome was that the teachers and all 75,000 public employees won a 5% raise.

When the state legislature attempted to lower the raise to 4%, teachers threatened to occupy the capitol building, vowing to remain until their demands were met.

Inspired by the victory in West Virginia, 30,000 Oklahoma teachers went on strike at the beginning of April.

As in West Virginia, the teachers enjoyed massive support from the community. Free food was delivered daily by local businesses. Hundreds of thousands of dollars was raised nationally to support them.

Construction workers refused to do any work in the capitol while the teachers and their supporters were there protesting. Alongside the teachers, over 100,000 Oklahoma state employees began to mobilise to demand wage increases.

A poll at the end of the strike showed that 72% of Oklahomans supported the teachers' walkout "until all of their demands are met." These are astonishing numbers, for a state considered to be a right-wing bastion.

The reactionary Republican state government conceded a $6,000 yearly wage increase for the teachers.

There were also huge protests, sickouts and walkouts by teachers in Kentucky when the Republican-dominated state government tried to cut pensions programmes and education funding. The 10,000-strong crowd at the state capitol forced the Republican governor and legislature to abandon their plans.

Meanwhile in Arizona, on 12 April, Governor Ducey was forced by a month of massive protests to concede to demands for a 20% pay raise for teachers by 2020. Teachers have voted to walk out on 26 April if Republican lawmakers refuse to reverse $1 billion of education cuts.

Much of the American liberal left concluded that the working class in states like West Virginia, which voted 68.7% for Trump, should be dismissed as one reactionary mass. Socialist Alternative explained the contradictory reality and the need for the labour movement to take a stand and build a movement that spoke to the common interests of all working people while also boldly fighting racism, nativism and sexism.

The West Virginia teachers, less likely to vote Trump than the state as a whole and also inspired by the emerging women's movement, point precisely to the class contradictions in 'Trump country'. The teachers won the support of the mass of the West Virginia working class in a fight with a reactionary, Republican-dominated legislature.

Trump and the Republicans in Congress have passed massive tax breaks for the rich while attacking healthcare, especially for poor Americans. Republican state governments have done the same.

The teachers who moved into action are forced to have two and three jobs. They are unable to pay their student loans and face ever-increasing healthcare and living costs. These experiences are shared by a large section of the US working class, even during this supposed economic "upturn."

The demand for change and frustration with the existing state of affairs was shown by the outstanding votes received by Bernie Sanders. Bernie won all counties in West Virginia in the primary election against Hillary Clinton in 2016.

He called for a "political revolution" against the billionaires, taxing the rich and big business, free education, and a national healthcare system.

The anti-union laws did not defeat the strike. As one teacher in West Virginia said: "If the strike is illegal, all that means is that we don't have to play by the rules they made for us."

The strategy of the existing union leadership and local Democratic politicians was not to prepare for strikes or militant actions but to try for some sort of a deal. This was completely rejected by the rank-and-file teachers.

But this autumn, the Democrats are likely to be major beneficiaries of the teachers' struggles in these states as people seek to "throw the bums out."

A developed expression of working class political independence may not materialise before this November. But teachers already realise through their own experience that they cannot rely on the word of politicians. They will have to keep their movement going to win their full demands.