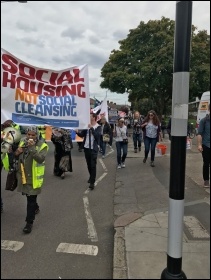 The Trade Unionist and Socialist Coalition (TUSC) in Haringey provided a glimpse of what a genuine anti-cuts socialist campaign would look like. We explained to hundreds of people why we need to reopen the youth centres, centres supporting people with autism and nursing homes, build thousands of houses and cap rents.

We made it clear that we would not wait four years to pay carers the London living wage, as Labour's manifesto suggested. It is not enough to 'wait and see', we need to fight austerity now and refuse to implement more cuts.

We pointed to the need for the millions in reserves to be spent to restore our services and alleviate the current emergency for so many in Haringey, while a campaign is waged against the government for more funds.

When knocking on doors, holding numerous stalls and distributing 4,500 leaflets, the response to our anti-cuts ideas and our strategy to make them reality was extremely positive. But although we were standing against thoroughbred Blairites, many people voted Labour to support Corbyn.

When we broke the bad news to one woman who had already voted for Labour, she was shocked and saddened, phoning her husband right away to tell him to vote for TUSC!

But while enthusiasm for Corbyn's programme was clear in Labour's vote, the Lib Dems won seats from Labour.

However, the new intake of Labour councillors have promised to be different to their predecessors and they have raised expectations. TUSC and the Socialist Party are eager to fight alongside all those who campaigned against cuts for Corbyn's manifesto to be implemented straightaway.